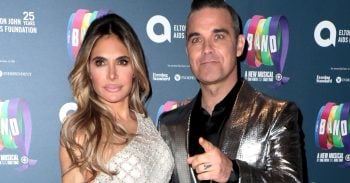 The pair announced their departure yesterday

Husband and wife X Factor judges Robbie Williams and Ayda Field have reportedly quit the show after they were told their salary demands would not be met.

According to The Sun the couple requested an increase on their £10 million pay packet on the reality show.

The pair made a joint announcement yesterday on their Instagram accounts confirming their departure from the show, claiming they were “too busy”.

“A quick update from Team Williams…” they said. “It’s been a very busy year so far and Vegas has been incredible – we cannot wait for June and July to do it all again. We’ve got some very big announcements coming soon – but we can’t reveal all yet.

“Sadly as it’s impossible to do everything, we’re gutted to tell you we won’t be able to return to The X Factor this year.”

They went on to say that they would still be supporting the show, and were looking forward to working with fellow judge and show creator Simon Cowell in the future.

“We will, however, be working on projects with Simon going forward – and as huge fans of the show, we will still be tuning into The X Factor, voting and winding Simon up!”

But in his column for The Sun, Dan has claimed that money, not time, was behind the couple’s decision to leave.

According to his source, raising the couple’s salaries was never going to be an option.

“Robbie and Ayda were already on a £10 million deal and there was no way we were going to be able to increase that sort of money,” the source said.

“They haven’t fallen out with Simon – they were all on holiday together recently – but there are business realities at play.”

Late last year the singer confirmed he was hoping for a pay rise from the show, telling The Sun he wanted to be “treated kindly.”

“We would love to come back. But we need to be treated kindly, so we’ll see,” he said. “Is that my pitch for a pay rise? Abso-f***ing-lutely.”

It looks like the whole judging panel could be in for an overhaul, after fellow judge Louis Tomlinson also hinted that he would leave the show to prioritise his music career.

Speaking to Dan in an interview for ITV’s Lorraine, he said “I had an amazing experience last year but if it’s going to get in the way of my mission for this year, which is releasing the album, it’s probably going to be less likely.”

Read more: Christine McGuinness felt “like a carer not a mum” to her children

But according to Dan’s insider source, the judging format may be going back to his roots, with Louis Walsh returning as part of a good old-fashioned three-judge panel.

“The loss of Robbie is a big blow, given his huge star power. But the X Factor is being overhauled and we are likely going to go back to three judges, which is how we started.”

Whether the show will truly go back to its roots, with Sharon Osbourne rounding out the judges table remains to be seen.

Other starts tipped for a possible slot include Cheryl, Nicole Scherzinger and Dannii Minogue.

Entertainment Daily has contacted reps for Robbie, Ayda and X Factor for comment.

Who do you want to see at the judges table? Leave us a comment on our Facebook page @EntertainmentDailyFix and let us know what you think of this story.