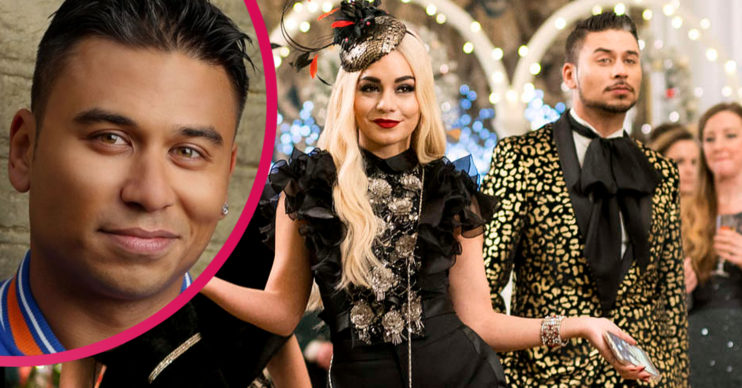 Who is Ricky Norwood? Princess Switch 2 star and Fatboy from EastEnders

Netflix fans were amazed to spot the lovable soap star

The Princess Switch 2: Switched Again hit Netflix this month (November), and some soap fans found themselves distracted by a familiar face.

After becoming known for playing Fatboy in EastEnders, Ricky Norwood has turned his sights to Hollywood.

What is The Princess Switch 2 about?

In the original 2018 Christmas hit, Vanessa Hugdens plays Stacy DeNovo and Lady Margaret Delacourt of Montenaro, a pair of doppelgängers who trade lives on a whim after a chance meeting.

The sequel sees a third counterpart make an appearance, Lady Fiona, and she’s got a dastardly scheme that threatens everything.

Who plays Reggie in The Princess Switch 2?

Princess Fiona is determined to escape her money troubles and replace the soon-to-be-appointed Queen in the sequel.

To help her out, she enlists the help of her evil sidekick, Reggie, played by Ricky.

It’s a big departure for Ricky, who became known as loveable rogue Fatboy on EastEnders.

Will Ricky Norwood be returning to EastEnders?

He was a controversial addition to the cast at first, with some critics suggesting the character was based on negative stereotypes.

However, as his time on the show progressed he eventually became a favourite among fans.

So much so in fact, that the decision to kill him off in 2015 received widespread backlash.

Fans even began a petition begging producers to bring Fatboy back.

In 2018, Ricky hinted that he could make a return.

“Anything is possible,” he told OK! Magazine. “EastEnders is such a big machine, they’re going 100 different directions right now.”

Will there be a Princess Switch 3 and will Ricky star?

Princess Switch 3 was due to begin filming in Scotland at the end of 2020.

However, the coronavirus pandemic is still in full-swing. As a result, it’s unknown whether filming will be able to go ahead.

If everything goes as planned, Princess Switch 3 will hit Netflix in November 2021.

Considering the fate of Ricky’s character Reggie in the sequel, it remains unclear whether he will return.

Read more: Christmas 2020 could be saved by new Government proposals

What are fans saying about seeing Fatboy in Princess Switch 2?

EastEnders fans who sat down to watch the sequel were stunned to see Fatboy make an appearance.

Many rushed to social media to share their shock at seeing Ricky turn up in a Hollywood movie.

Today I'm living for the fact that Fatboy is in the new Princess Switch film 😂 #ThePrincessSwitchSwitchedAgain pic.twitter.com/Ojq2HNgXeK

Two things 1) there’s another one 2) ‘Fatboy’ from Eastenders is in it pic.twitter.com/MwliADtlUn

What has Ricky Norwood been up to since EastEnders?

Ricky left EastEnders in 2011 after five years on the show.

In 2013, he made an appearance in the Strictly Christmas special.

He followed that up with an appearance in Celebrity Big Brother in 2016.

As a result, The Princess Switch: Switched Again marks his first major acting role in a number of years.