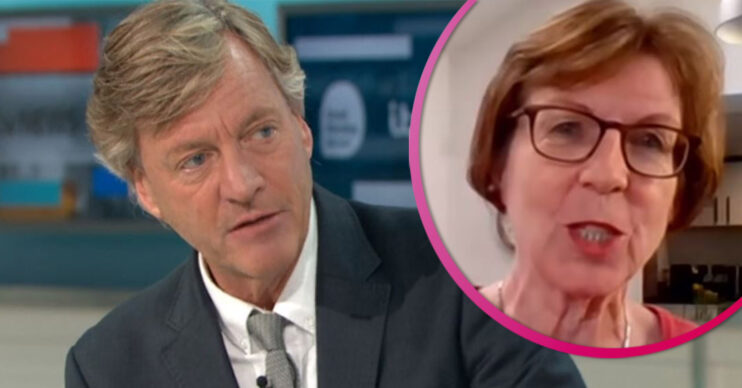 Richard Madeley has sparked Ofcom complaints over his GMB interview with Susan Michie.

On Monday’s Good Morning Britain, the presenter spoke with Sage scientist Susan about the government’s plans to lift all Covid restrictions on July 19.

They specifically spoke about whether face masks should be ditched if the plans go ahead later this month.

What happened between Richard Madeley and Susan Michie on GMB?

As Richard questioned the Professor of Health Psychology on her politics, she hit back.

Read more: Richard Madeley criticised on GMB as he says family had ‘touch of PTSD’ after son’s wedding

Richard had asked: “You’ve been a member of the Communist Party for about 40 years now, and we know that Communism is statist.

“We look at Communist countries around the world and we see that they are tremendously top-down dominant and controlled societies that they rule over.

“I’m putting this question on behalf of those who wonder about your politics – if your politics actually informs your sense of control.

“It’s not just the medical arguments, but you have a kind of a political bent to want the state to tell people what to do.”

“They come on to talk about the evidence, relevant theories, how we approach our scientific disciplines, and you don’t ask other scientists about politics so I’m very happy to speak about science which is what my job is and to limit it to that.”

Richard then asked: “So you’re saying that your politics doesn’t inform your opinion on this subject?”

Professor Michie said: “I’m saying that I agreed to come on this programme as a scientist.

“And I’m very happy to talk to you about the issues that you’re raising as a scientist which is the same for other scientists that you invite on to the programme.”

According to Metro, Ofcom received 145 complaints over the interview.

Viewers weren’t impressed with Richard’s questioning, with one writing on Twitter: “I don’t agree with Susan Michie, but asking a scientist about their politics seems a bit of a low blow.”

Another said: “Hi @richardm56 @GMB, you owe @SusanMichie an apology. If you don’t know anything about a subject, then please don’t talk about it.”

Thank you Deepti. I’m going to ask for a public apology from Madeley & @GMB & I hope others do also. A disgraceful way to treat a scientist, indeed anyone. And not sure he would have done that to a man. https://t.co/KHhxItgrTP

Ms Michie had even tweeted: “I’m going to ask for a public apology from Madeley & @GMB & I hope others do also.

“A disgraceful way to treat a scientist, indeed anyone. And not sure he would have done that to a man.”

However, others sided with Richard.

One added: “Thank you @richardm56 for your questioning of @SusanMichie today.”