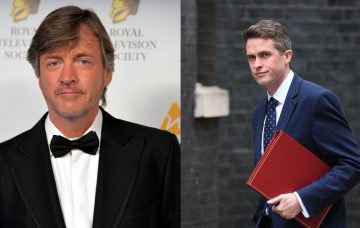 He abruptly terminated an interview with Gavin Williamson

Richard Madeley has defended his decision to cut off Gavin Williamson part-way through a live interview, saying it was “probably the most popular thing I have ever done on television”.

The ITV Good Morning Britain guest presenter said he was “not sorry” he terminated Tuesday’s interview after the Defence Secretary dodged a question four times.

Video of the exchange, in which Richard asked the minister whether he regretted telling Russia to “go away and shut up” after Moscow denied responsibility for the Salisbury poison attack, subsequently went viral.

Richard Madeley cuts off Gavin Williamson in awkward on air encounter as minister spectacularly fails to answer a question. https://t.co/kTL38MAtUy

The former This Morning Host told BBC Radio 4’s PM that Mr Williamson had been embarrassed about the Salisbury comment because it made him “sound like a pre-adolescent school child”.

Richard added: “He didn’t want to answer that question because it was embarrassing for him on a personal level, well tough.

“I realised he was never going to answer the question. That was insulting not to the programme or to me, I couldn’t give a damn, but it was very insulting to the viewers.

“So I excommunicated him and I’m not sorry I did it.”

Mr Williamson was speaking from West Midlands Safari Park in Worcestershire, where he was meeting military personnel preparing to go to Malawi to train park rangers to protect elephants and rhinos from poachers.

The Defence Secretary had responded to the GMB host’s question by paying tribute to health workers who treated Sergei and Yulia Skripal and highlighting the support offered to the UK by the international community.

But Richard, who described Mr Williamson’s earlier comment as “Trump-esque”, repeatedly interrupted him to demand an answer, before finally pulling the plug, saying: “All right, interview terminated because you won’t answer the question.

“It would be helpful if you answered a straight question with a straight answer.”

Richard told PM on Wednesday the feedback he had received about the interview had been 95% positive.

He added: “In fact I’d say it’s probably the most popular thing I have ever done on television.

“It was a snap decision, we didn’t go into that interview with any concept, I don’t think any broadcaster or interviewer has ever actually kicked a serving Cabinet minister off air.

“I don’t think it has happened before and it certainly wasn’t my gameplan.”