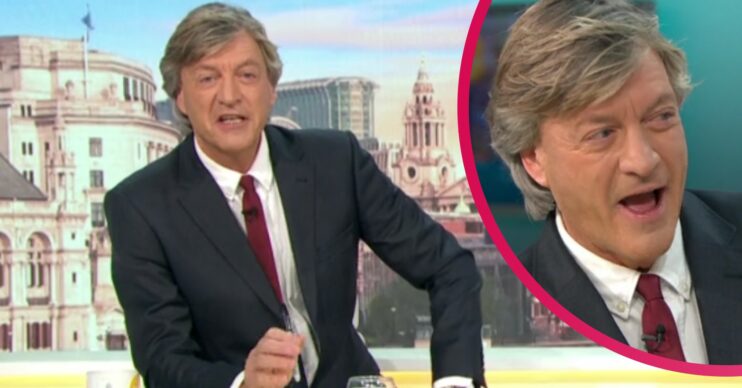 Richard can't seem to catch a break with GMB viewers!

The 65-year-old was slammed by viewers for talking about himself too much on today’s Good Morning Britain!

What happened with Richard Madeley on GMB today?

Richard and Susanna Reid hosted Good Morning Britain today, much to the disappointment of some viewers.

During the show, they welcomed ex-footballer Neil “Razor” Ruddock on to talk about his new campaign to kick weight loss shame out of football. Neil opened up during his appearance on GMB about his struggles with his weight.

“I’ve been on a diet all my life,” the 53-year-old said. “I don’t remember not being on a diet.” He then said that while he was playing, he was always “three, four, five-pound overweight”.

“I think you’re one of them people, the lucky ones, who can eat and not put weight on,” Neil said to Richard.

“No, I’m not gonna talk about myself, but that’s not true,” Richard said. He then went on to say that his father, who was a “bit overweight” had died of a heart attack aged 49.

He then said that he keeps his weight off because he doesn’t want to go the same way as his father.

Whilst Richard only spoke for a short while as he explained how he kept his weight healthy, many were unimpressed. Some took to Twitter to slam the star for making the interview with Neil about himself.

This is something Richard has faced criticism for in the past too.

“Richard – ‘I’m not going to talk about myself’, then predictably launched into a monologue about himself,” another viewer said. “Narcissist.”

During an interview with the actor Daniel Mays later on in the show, Richard was again slammed for apparently making the interview about himself.

“Why isn’t Richard letting Daniel speak? What’s the point in having people on when you just speak over them and plug competitions and talk about yourself?” one viewer asked.

Another said: “Why does Richard always put himself in the story. He is so annoying he loves his own voice. RICHARD shhhh let the guest speak.”

Not everyone was against Richard though.

“Richard Madeley is a national treasure!!” one viewer said in defence of the presenter.

One gushed: “So good to see Richard on this morning, wish he was on everyday.”

What else happened on the show?

This wasn’t the only incident Richard was slammed for on today’s show. In fact, Susanna was criticised too today, as the pair discussed whether or not Adele was engaged.

Adele was at the BRIT Awards last night. As well as winning three awards, the star was also sporting a big diamond ring on her engagement finger.

This led to Richard and Susanna debating whether or not the 32-year-old singer was engaged again.

Later in the show, they were joined by Strictly star Rhys Stephenson, and the subject of Adele’s engagement came up again.

It’s safe to say viewers were not impressed.

“Anyone else getting sick of the self-obsessed Adele coverage?” one viewer asked.

“FFS @GMB are STILL banging on about Adele,” another said.

“Who really cares if Adele is engaged or not ffs?” a third grumbled.

Good Morning Britain airs weekdays at 6am on ITV and ITV Hub.