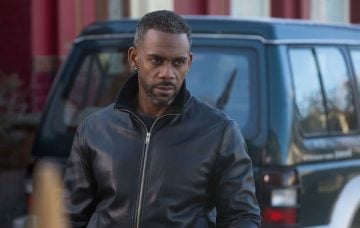 Vincent Hubbard is set to leave Albert Square in much-anticipated scenes to air tonight (Friday 20 April) – but does he die or leave a free man?

Ever since Richard Blackwood confirmed that he would be leaving EastEnders a few months ago, speculation has been rife about HOW he departs the soap.

In debt up to his neck, Vincent has made a dodgy deal with the police and grassed up Irish villain Aidan Maguire and Albert Square’s very own menace Phil Mitchell.

Read more: Is EastEnders’ Vincent heading into a dangerous trap? Fans think so!

And some are even beginning to feel sorry for him!

In an interview with Metro.co.uk, Richard admits that his character is genuinely terrified after a new DCI has told him he needs to leave Walford immediately to stay alive.

He says: “Vincent is really scared for his life – being told that he has to go now is not something he had prepared himself for. He thought that he had more time so it definitely catches him off guard and leaves him in a very vulnerable place to say the least.”

In the interview, he goes on to admit that Vincent’s storyline will be thrilling, teasing: “He decides that he needs to go – he’s not given much of a choice but he still wants to do the right thing by his family. He knows he can’t leave them behind.

“The audience are going to be in for a nice little thrill because they won’t see what happens next coming.”

Richard also laments the fact that Vincent wasn’t able to escape his past and have a better life, saying: “For Vincent, all of the demons he thought he had dealt with are coming back and biting him.”

The actor, comedian and rapper, 45, joined the soap three years ago and has been a main player in storylines ever since.

But will Vincent die in his big exit storyline?

Or will the door be left open for Richard to return in the future?

Would you like to see Vincent return to Walford one day? Leave us a comment on our Facebook page @EntertainmentDailyFix and let us know what you think!