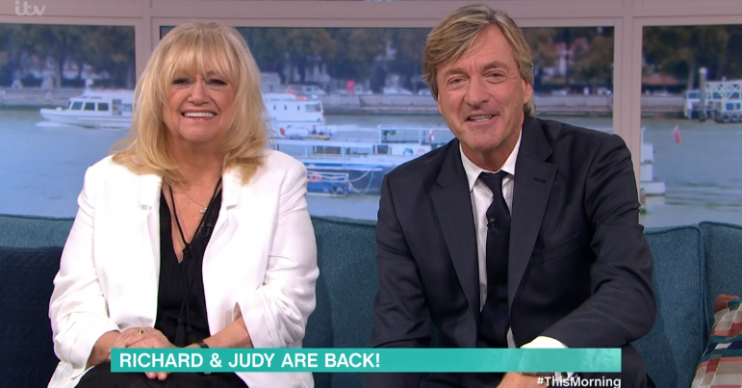 Covering for Ruth and Eamonn

TV legends Richard Madeley and Judy Finnigan are set to return to the This Morning sofa this Friday (February 21 2020).

With regular presenters Phillip Schofield and Holly Willoughby away for the half-term break, the married couple – who were the show’s original presenters from 1988 to 2001 – will present the show as a one-off.

On Friday's show, @richardm56 and Judy are back, and they'll be giving you the chance to win some cash with a game of It's Behind You!

To enter, email thismorning@itv.com with your full name, Skype address and a contact number by 8pm on Wednesday 19th February. pic.twitter.com/KtCT46dOKk

Read more: This Morning’s Dr Ranj ‘so excited’ as he gets his own ITV show On Call

This week, Ruth Langsford and Eamonn Holmes have been taking the reins, but the official This Morning Twitter account shared a video confirming Richard, 63, and Judy’s, 71, return.

The tweet said: “On Friday’s show, @richardm56 and Judy are back, and they’ll be giving you the chance to win some cash with a game of It’s Behind You.”

In the video, Ruth said: “Richard and Judy are back. There they are on the sofa and they’re going to be playing the classic It’s Behind You.

Richard and Judy are back. There they are on the sofa and they’re going to be playing the classic It’s Behind You.

“We love that game. We did that once and it was an utter disaster, but they’re the experts that’s why – it’s their game really.”

Eamonn then urged viewers to contact the show if they want to play along with the game.

It’s Behind You asks viewers to describes famous faces and objects on a screen, and the presenters – who can’t see the screen – have to guess who or what it is.

Richard and Judy last appeared on This Morning in October 2019, when they made first appearance on the show for 18 years.

As cameras rolled, Richard said: “Do not adjust your set. It’s lovely to be back but it’s weird.”

Judy agreed by saying: “It’s actually weird to be back.”

After their return, Richard appeared on Lorraine, and told the host they would be returning: “Judy has been saying no to everything for a decade now, she won’t come back to do telly.

“But she loved coming back to This Morning.

“They’ve asked us to do it again. So we will, we still have to work it all out though.

Best day ever – the return of Richard & Judy on #ThisMorning LOVE THIS @richardm56 pic.twitter.com/PBlVwot93B

The couple received a glowing response to their return last year, with many excited at seeing them on the show again.

“Best day ever – the return of Richard & Judy on #ThisMorning LOVE THIS @richardm56,” one viewer wrote in Twitter.