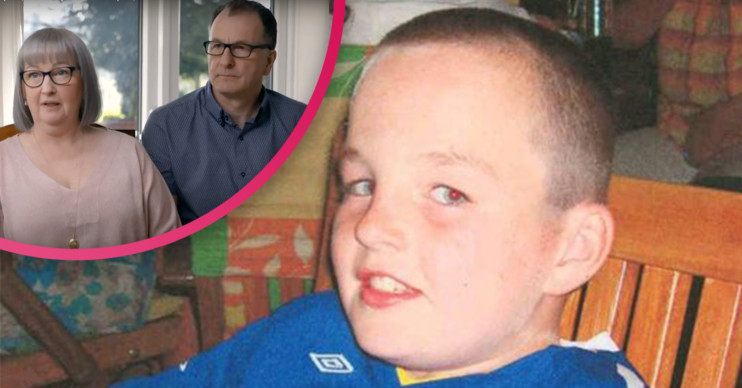 Are Rhys Jones’ parents still together? Mel and Steve’s story will be told in Little Boy Blue

The heartbreaking story of Rhys Jones will be remembered in Little Boy Blue tonight (May 24).

In August 2007, the 11-year-old was shot and killed in broad daylight while on his way home from football practice.

Since his tragic death, his parents Steve and Mel Jones have fought to keep their son’s memory alive.

But 13 years on, are Rhys Jones’ parents still together?

Are Rhys Jones’ parents still together?

Rhys Jones’ parents are still together.

The couple met in 1982 while working at Tesco and have been married for 33 years.

However, in Mel’s book, Stay With Me, Rhys, it’s revealed that the couple briefly split after losing their son.

During an interview on ITV’s This Morning in 2018, Steve said: “We both felt like we were going in different directions.”

Mel added: “There will always be someone missing from our family.”

The couple, who are also parents to son Owen, fiercely supported each other during the court case – which saw 18-year-old Sean Mercer charged with murder.

However, once the trial was over, they struggled to come to. terms with their grief.

A source told Sunday People at the time: “It was obviously a traumatic time for Steve and Mel. It took its toll.”

Mel and Steve decided to separate and he left the family home in Croxteth, Liverpool.

But after some time passed, the couple reunited and are now stronger than ever.

What do Mel and Steve think of LittleBoy Blue?

Rhys Jones’ parents were heavily involved in the making of Little Boy Blue.

They collaborated with ITV on the four part series to honour their son.

Mel explained: “We saw this as an opportunity to let the public see what happens to a family like ours in a situation like this.

“We wanted to show how the pressures we were placed under, the huge weight of grief thrust upon us, the endless waiting, not knowing if we would get justice for Rhys, can tear a family apart.”

She added: “We spoke very openly to the programme makers about what we went through because we wanted to let Sean Mercer and the others involved in Rhys’s murder know that our sentence never ends.”

What happened to Rhys Jones’ killer?

Sean Mercer was sentenced to a minimum of 22 years in prison for killing Rhys Jones.

He was just 16-years-old at the time and claimed during the 2008 trial that the murder was an accident.

Earlier this year, Sean appeared in court in an attempted to get his sentence reduced.

The now 29-year-old has the right to appeal his sentenced as he was a youth when he was convicted.

If the killer is found to have “matured” and “made exceptional progress”. since the sentences was originally passed, he may have his sentence reduced.

A High Court judge is set to review the case.