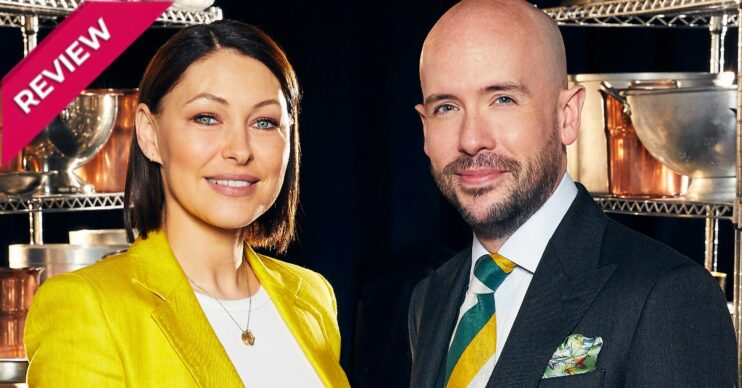 REVIEW: Cooking with the Stars on ITV1 – worth watching? Nothing we haven’t seen a million times before

ITV1 launches their brand new celebrity cookery show Cooking with the Stars this week and we’ve watched it in advance to be able to give you an honest review.

Well, we say it’s a ‘brand new’ series, but we’ll forgive you if you think you’ve seen it before.

Here’s our take on the new foodie series.

Cooking with the Stars review

Emma Willis and Tom Allen host Cooking with the Stars, with Emma promising it’s “a celebrity cooking battle like no other”.

The trouble is, it isn’t.

Our main problem with Cooking with the Stars is that it feels like so many other shows of the same ilk.

Eight celebrities are paired with a professional chef who will mentor them through one dish per week.

For example, in this week’s episode one, Harry Judd meets his mentor Nisha Katona, while Johnny Vegas is paired with Rosemary Shrager.

The two celebs go head to head to make a different dish, which is judged at the end by the other six judges.

The losing celebrity from each cooking round will be at risk of leaving the competition as they fight for their place in The Cook Off.

This eliminator round is decided by a blind testing from the chefs, who are unaware of whose food they’re passing judgment over.

Cooking with the Stars hosts

Even the hosts don’t seem convinced.

We love Emma Willis obviously – what’s not to like?

But does she have to host everything at the moment?

And Tom Allen co-hosts GBBO: An Extra Slice and the main show when Noel Fielding is away so it all feels just a little bit same-y.

Tom describes the show as “the ultimate showbiz food fight” but even his witticisms struggle to lift this TV series from being distinctly average.

The music and voiceover attempt to bring drama, but it doesn’t quite reach the viewer sitting at home.

Although Denise Van Outen in tears during a tease for a future episode, and a kitchen counter covered in blood – human not animal – all provide a morsel of tension.

Read more: Johnny Vegas: Carry on Glamping – Will there be another series and what is Johnny doing next?

Who are the celeb pairings?

The celebrities are all the usual reality TV show fodder, nothing new to see here.

But it’s the chefs who bring the entertainment and we’d like to see more of them.

DJ and songwriter Naughty Boy is mentored by Judy Joo.

Meanwhile, McFly’s Harry Judd is mentored by Nisha Katona, and comedian and actor Johnny Vegas is teamed with Rosemary Shrager.

All of the celebrities say they haven’t cooked before with the words “out of my depth” a mantra.

Are the viewers supposed to believe these eight celebrities haven’t cooked before?

At least six of them are parents!

We love cookery shows and wanted to love this, but it just all feels rather awkward.

Perhaps it would help if the competing celebs cooked the same meal? Or if they weren’t allowed to sound the gong to get help from their mentors during cooking?

There’s too much attempt to build tension, and not enough time in the kitchen.

It’s not terrible and it’s entirely watchable if there’s nothing else on the other channels.

But don’t expect to pick up any cookery tips, it’s not that kind of show.

If you need something as light as a soufflé after THAT Euro 2020 final, then this might just be for you.

Will you be tuning in to Cooking with the Stars on ITV1? Leave us a comment on our Facebook page @EntertainmentDailyFix.