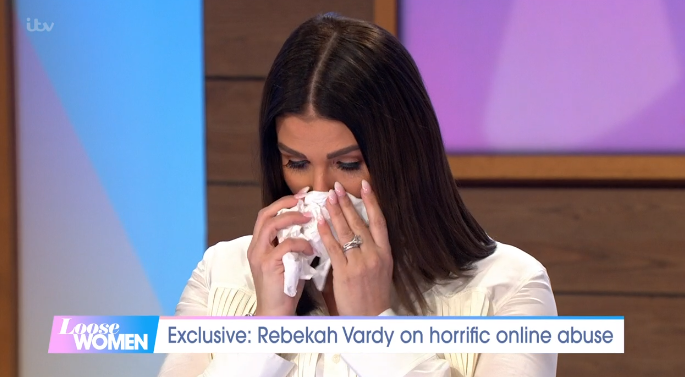 Coleen accused her of leaking personal information to the press

Last year, Rebekah was at the centre of a storm after fellow WAG Coleen accused her of leaking personal information to the press.

At the time, she denied Coleen’s allegation and said she was “disgusted” that she had to deny it.

Speaking about the drama on the daytime show, Rebekah, 37, said: “It’s really hard because we are in the middle of a legal battle.

“It was really hard. I was in Dubai for a baby-moon. It was my manager that messaged me [about Coleen’s statement] and there it was in all its glory. It was hideous and horrible and I wasn’t prepared for what was to come.

I ended up in hospital three tines with severe anxiety.

“It escalated and it was not great and I have to be really careful about what I say. I think the trolling was the worst part – this was a whole new level.”

She tearfully continued: “I had people messaging me saying nasty stuff and one in particular [said], ‘you fat ugly rat I hope you and your baby rot.’

“I ended up in hospital three times with severe anxiety and felt like I couldn’t go out. I ended up with kidney stones.

“I went to the police and some arrests were made,” referring to trolls who sent her online abuse.

Speaking about how her husband Jamie and their kids dealt with the row, she said: “He really struggled with seeing my upset and down. It was a hard time.

“[My daughter Megan] found it really difficult. There were people sending her horrible messages. You can only say to the kids, ‘don’t read it,’ but getting that across to a 15-year-old is really hard. She found it difficult.”

Speaking about her new baby daughter, Olivia Grace, Rebekah said: “It’s a new year and it’s time to focus on family and the new baby.

Little Olivia was then brought onto the show as the presenters gushed over the tiny tot.

Back in October, Coleen had said in a statement shared to her social media: “For a few years now, someone who I trusted to follow me on my personal Instagram account has been consistently informing [a] newspaper of my private posts and stories.

“I have saved and screenshotted all the original stories which clearly show just one person has viewed them. It’s….. Rebekah Vardy’s account.”

Shortly after, Rebekah said in a statement: “As I have just said to you on the phone, I wish you had called me if you thought this.

“I never speak to anyone about you as various journalists who have asked me over the years can vouch for. If you thought this was happening you could have told me and I could have changed my passwords to see if it stopped.

She added: “I’m not being funny but I don’t need the money what would I gain from selling stories on you? I liked you a lot Coleen and I’m so upset that you have chosen to do this, especially when I’m heavily pregnant.