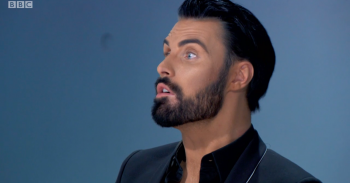 Things got seriously heated between the celebs

Rylan Clark-Neal warned at the start of the show: “I feel like I’ve really got to get my hands dirty,” and he certainly did on Friday evening’s Celebrity Apprentice.

Viewers were left shocked by the usually fun-loving TV presenter losing his temper with his fellow celebs, blasting them in a brutal take-down as “charlatans”.

The star-studded TV special, in honour of Comic Relief, saw two teams of Men Vs Women try to organise and host a themed cabaret night – with less than 48 hours to secure the acts and celebrity guests.

But after failing miserably at their fundraising task, the Boys team captain Rylan faced being fired by Lord Alan Sugar.

He chose football manager Sam Allardyce and comedian Omid Djalili to be in the firing line with him, as the worst performing members of his group.

In the board room, the former Big Brother presenter looked furious as Alan, 71, told him he hadn’t been a “proper project manager”.

Gesturing angrily at the men either side of him, Rylan told the billionaire: “Well, I had no choice to be fair.

“I’ve got Billy [bleeper] to my right, who promises me the world. To my left, I’ve got Fantasy Football, OK? I told Sam we wanted his football contacts.”

Sam tried to defend himself, and things got heated. Rylan then told Alan: “I think either one of these charlatans should be fired. I delivered more than you two put together. I delegated you jobs that you couldn’t do.”

Sam then challenged him, saying: “You were flapping all the time, Rylan.”

The 30-year-old blasted back: “What was I flapping about? Who was the only person trying to get someone? Me. You better carry on talking because you’ve got a train to catch, yeah?”

Rylan raised his voice as Sam accused him of having a “meltdown” and they continued to argue over who was to blame.

Alan ended up firing Omid, who refused to accept being fired, hitting back: “No, YOU’RE fired!” And then said he’d be calling his lawyers.

Viewers loved the brutally honest comments from the TV star, flocking to social media to comment on the tense exchange.

One wrote: “@Rylan on the apprentice is honestly brilliant, me and my dad were [bleeping] ourselves 😂 loved it.” Another said: “@Rylan Rylan Clark-Neil is the best thing on Celebrity apprentice for #ComicRelief . We need to have more of @Rylan and his quick wit on TV, he’s fabulous and fun…”

A third added: “@Rylan Apprentice…..you were brilliant and funny 🌹😻🌹😻…thanks for the laffs xx.” Another tweeted Rylan saying simply: “You are literally amazing!”

Many picked out the insults as the best part, writing: “Fantasy football and Billy [Bleeper]. This is why @Rylan is a national treasure.”

Some were less sure about arguing during a Red Nose Day show, writing: “I’ve watched Apprentice since it started and as this was for charity I think the stuff in the board room went a bit too far.” A second said: “@Rylan what a loud mouth wannabe… should have gone instead.”

Meanwhile, Omid promised his team he could book singer Cher, but failed, instead giving guests a disturbing performance featuring naked men, covering their bits with balloons…

After all that, it’s not terribly surprising that the women came out on top – is it? But Rylan’s hilarious comments are probably the real winner here.

What did you think of Rylan on the show? Leave us a comment on our Facebook page @EntertainmentDailyFix and let us know what you think.