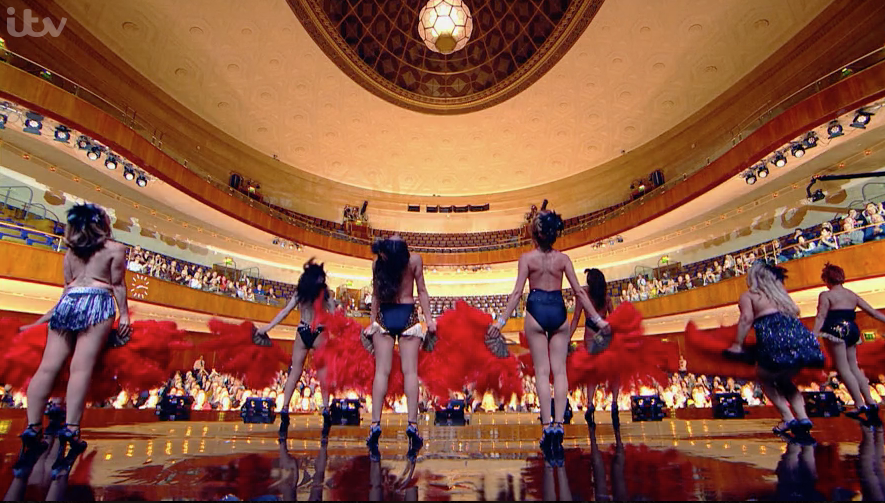 The group danced to This Is Me from The Greatest Showman

The Real Full Monty Ladies Night has been hailed as “inspirational” and left countless viewers in floods of tears last night.

Twenty-four hours after the men took to the stage, eight female celebs stripped off as they performed a classy routine to This Is Me, from The Greatest Showman, choreographed by Diversity’s Ashley Banjo.

Cancer survivor Victoria Derbyshire and Liberty X singer Michelle Heaton, who have both had mastectomies, were overcome with emotion as they completed the performance, despite being nervous beforehand of baring all.

Earlier, Michelle broke down as she told how she hadn’t truly come to terms with her double mastectomy and full hysterectomy.

She had made the decision to have the drastic surgery five years ago after being given an 85 per cent chance of developing breast cancer  and 30 per cent of ovarian cancer.

The 38-year-old told Coleen Nolan and reality star Megan McKenna: “I don’t know why I’m angry because I’m lucky that I had the choice.

“I don’t expect anyone to feel sorry for me but I don’t talk about it, even with my family and friends because I don’t want them to ever feel awkward.

“I was offered counselling but then I never had time.”

Coleen told her: “I think you should. I think you’ve probably got everything in there — fear, anger, sadness. It’s unfair.

“You’ve given yourself a massive chance of a future, and that for your kids is priceless.”

Married mum-of-two Michelle was diagnosed with a mutated BRCA2 gene in 2012, which her six-year-old daughter Faith has a 50 per chance of inheriting.

The 49-year-old struggled the most with self-doubt in rehearsals and very nearly backed out after a trip to Moulin Rouge in Paris, before Coleen managed to persuade her to continue.

Joyful. Moving. Empowering. Respect to all the wonderful women on #therealfullmontyladiesnight

Blown away by the bravery of these women. Inspirational, each and every one of them. Very emotional watching in the back of a taxi! Guys AND girls, make sure you check yourselves… Spread the word! #cancerawareness #TheRealFullMonty 👏👏👏❤ https://t.co/5sSw6hEKX6

I was actually crying at the stories, it hit home! So many of my loved ones have lost their battle to cancer #TheRealFullMonty

#TheRealFullMonty Ladies Night. Well done ladies you were all a inspiration tonight foe a great cause to spread awareness of this awful disease. My friend is dealing with BC. So proud of you girls. Amazing 💕😘

Inspiring, moving, brave and courageous. Truly wonderful and powerful message. Fantastic two nights of raising awareness. You should all be very proud. So well done ❤ #therealfullmonty

Wow ! Cried all the way through this, very emotional to watch. Well done to the ladies for their message. #TheRealFullMonty #checkyourboobs https://t.co/DxhVu7BKZS

The women performed the routine in front of 2,000 people at Sheffield City Hall and millions on television to raise cancer awareness.