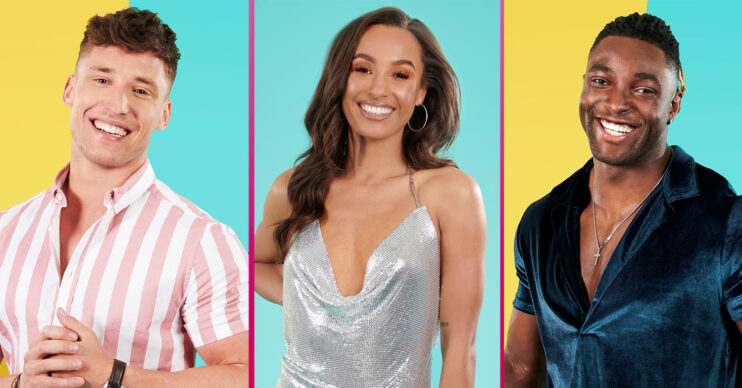 Ready to Mingle on ITV2: When does it start and who are the contestants?

Meet the boys competing for one girl's affections

Ready to Mingle is a new dating show coming to ITV2 tonight, but who are the contestants taking part?

The reality series, hosted by comedian Katherine Ryan, will see one stunning girl trying to find the perfect man.

12 men will try and compete for her affections, however, half of them are looking for love while the other half are in it just for the money.

When does Ready to Mingle on ITV2 start?

Ready to Mingle will air on ITV2 on September 6 at 9pm.

It looks set to replace the hole Love Island has left behind after the end of this year’s series.

But who is the girl on a search for love? Find out more below.

What is Ready to Mingle about?

The series will see a single girl on a quest to find the perfect guy.

12 male suitors will compete for her affections and the opportunity to share a £50,000 cash prize.

However, some of these boys are already in relationships and their partners are watching every move their boyfriends make. Yikes!

This means if one of the boys plays the game well and is able to convince the girl in question he’s single, he may scoop up the cash prize.

The girl and boys will reside in a beautiful house in Devon for three weeks as they get to know each other through activities, games and dates.

She will eliminate a boy until one she feels is single remains.

So without further ado, Sophia Maria is the lucky lady who the boys will try and win over.

Sophia says her family and friends would describe her as “confident” and “outspoken”.

Speaking about what she’s like as a girlfriend, Sophia says: “I wear my heart on my sleeve and I go into things head first if I really like someone, I just
tell them straight up and I don’t always play things cool.

“I’m not good at hiding any kind of emotion – even anger or frustration.”

Discussing her type of boy, Sophia adds: “I like a dominant guy, someone who’s headstrong. I like being bought flowers and presents and I like a cup of tea in the morning.”

Who are the boys?

Now, we take a look at the 12 boys who will be vying for Sophia’s attention.

Semi-professional rugby player John is first up and says he likes a girl “to be fun and attractive – I like a girl with a nice bum”.

He says people may think he’s “unapproachable” at a first glance, but he’s actually a “massive softie”.

Railway worker Casey is looking for “confidence” in a girl and says he’s “incredibly loyal”.

However, when asked where he sees himself in five years time, Casey reveals: “Living in a penthouse with three model girlfriends.”

Next up we have Louie, a model and handbag designer.

Louie is looking for confidence in a girl and “someone who carries themselves well”.

He also describes himself as “very caring, thoughtful and a bit mischievous” and likes “a mature woman”.

Another guy competing for Sophia’s affections is Hakeem, a personal trainer.

Hakeem says he’s been “lucky” with relationships in the past and wants to find “a friend and a partner”.

When asked what kind of boyfriend he is, Hakeem said: “Patient, thoughtful and I’m one for family. If I get in with your family, they’re literally like family to me.”

Actor and entrepreneur Malcolm is up next and says he’s “massively attracted to someone’s mind”.

He says he has “played the field on a few occasions” but has “had three serious relationships”.

Meanwhile, Malcolm says in five years he sees himself “on a yacht, making an income from at least five companies”.

Carpenter Rudi says his celebrity crush is Michelle Keegan and is looking for a girl who is “trustworthy, selfless and loving”.

He says he “rates himself very  highly” and adds that he’s “generous, selfless, most of the time and very supportive”.

Rudi says he wouldn’t expect the girl to pay on a date.

Next up is electrical engineer Chris, who says he’s “proper romantic” and likes the “chase”.

Chris admits he doesn’t “enjoy sleeping around” and “always wears my heart on my sleeve and I’m so honest”.

He adds: “When I’m in a relationship and not just having fun, I am very committed but it takes a long time to get to that point.”

Meanwhile, property developer Louis is next up and says he’s looking for someone “who can make me thrive with what I do”.

Louis also has a connection to Joe Swash, revealing the TV star gave him advice about “how to handle things when I’m on the show”.

The star adds: “I’m not a jealous type or I don’t like things to go toxic, so I like someone who’s not too intense.”

Model Toby is looking for someone who “doesn’t take themselves too seriously”.

He says: “I wouldn’t ever chase someone. If they’re not giving anything back, I’m not interested.”

Toby adds that he’s a “sucker for blue eyes”.

Electrician Elliott hopes to find someone who “makes me laugh and enjoys making memories”.

Elliott says he’s a “one girl man” and insists he’s an “old romantic” who “always picks up the bill”.

Elliott adds: “I’d say I’m the life and soul of the party. I’m not afraid of talking to new people.”

Professional boxer Drew says he’s “had my times where I’ve been a bit of a player but that was mainly when I was younger”.

Drew says his friends would describe him as a “very nice person, cheeky, charming” and admits he’s a mummy’s boy.

He adds: “I’ve had three long-term relationships, but I’ve dated a lot of girls.”

He says: “I’ve had a few and a four-year relationship. I enjoy being single, but I enjoy the company of having a partner there more.”

Ready to Mingle airs on ITV2, tonight, at 9pm.