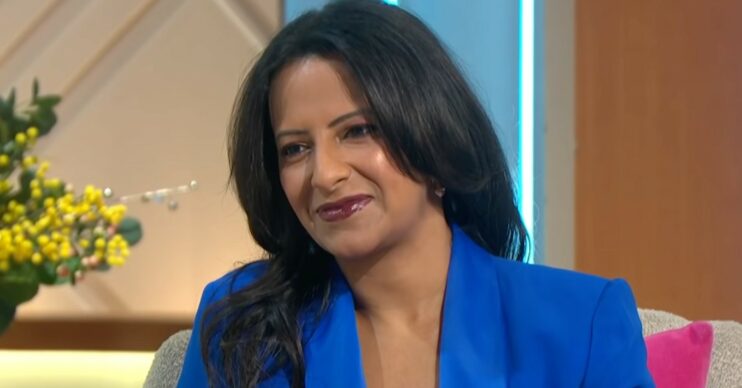 She was previously married to Ranjeet Singh Dehal

Ranvir Singh previously opened up on the real reason she decided to keep her marriage break-up a secret.

The Good Morning Britain host is set to appear on the her new ITV series, Save Money: My Beautiful Green Home, tonight (October 18).

The programme follows three families as they transform their traditional properties into eco-friendly homes.

When it comes to her own home life, Ranvir prefers to remain fairly private.

During their marriage, the couple went on to welcome eight-year-old son Tushaan.

I keep my private life private, mainly to protect Tushaan

But they sadly split some time ago.

Ranvir made the decision to keep their split a secret, and rarely talks about her former husband.

Opening up on the reason last year, the 44-year-old star told Woman & Home: “I keep my private life private, mainly to protect Tushaan.

“I’m not ruling it out, but for me, there would have to be a wider purpose for discussing it.”

The devoted mum shares a close bond with her only son.

However, she admitted that life as a single mother can be hard.

She added: “I struggle with an enormous amount of guilt with my son and not being there when he goes to school.

“We’re very attached to one another because it’s just me and him.”

While Ranvir tends to keep her private life close to her chest, she did briefly hint at past relationship problems on GMB.

What has Ranvir said about her previous marriage?

Back in 2019, Ranvir appeared to hint at being cheated on during a segment with co-host Ben Shephard.

The pair were discussing whether it was right to check a partner’s phone.

At the time, Ranvir admitted: “I have looked at it, once.

Ben then responded: “Is that why you are no longer together?”

Ranvir added: “I can’t answer that question but I have always thought that if you ever feel you need to do that then the relationship is over because you obviously don’t trust that person.”

She went on: “I found something that needed addressing. So I would say you think you don’t need to do it until you do.”

Ranvir confirmed that she was single ahead of taking part in the last series of Strictly Come Dancing.

Watch Ranvir on Save Money: My Beautiful Green Home on ITV tonight at 8pm.