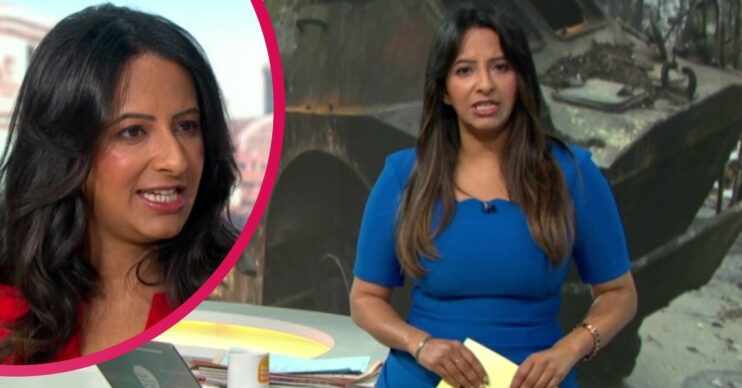 Ranvir has been on the show since 2014

GMB star Ranvir Singh has admitted that she’s “super happy” as her replacement for political editor is revealed.

Ranvir quit her role as political editor on the show recently, and GMB has finally found someone to step into the breach.

Last month news broke that Ranavir had quit her role as political editor on GMB.

It’s because of this, and the fact that she doesn’t enjoy standing freezing on the PM’s doorstep – that sources say has led to her deciding to resign from the role.

A source spoke to The Sun about Ranvir’s decision. They said: “Ranvir is ready for a new challenge at Good Morning Britain and she wants a bigger role within the team.”

“She quietly stepped down as the political editor of the show in anticipation of having a more substantial part to play,” they continued.

“She is a hugely popular member of GMB. Keeping Ranvir on board is something everyone wants. However, to keep her the job – and pay – will have to be right.”

Ranvir reacts to her GMB replacement

“Delighted that @LouisaJamesITV is joining Good Morning Britain’s politics team as Political Correspondent, taking over from @ranvir01,” she wrote.

“She’s experienced, hard working and obsessed with politics. Think she’ll do well with me and @kieronishere. Welcome to the (mad) House Louisa.”

“Super happy about this,” she wrote.

Since “quietly” stepping down from her role as political editor, Ranvir has been presenting the show far more regularly.

However, she has come under fire from some viewers recently.

Read more: Ranvir Singh under fire for appearance on GMB: “Is it really necessary?”

On March 10, Ranvir was slammed by viewers for “interrupting” guests, as well as her co-host, Ben Shephard.

“Ranvir and her constant loud and inane interruptions during interviews drive me insane!!!” one viewer tweeted at the time.