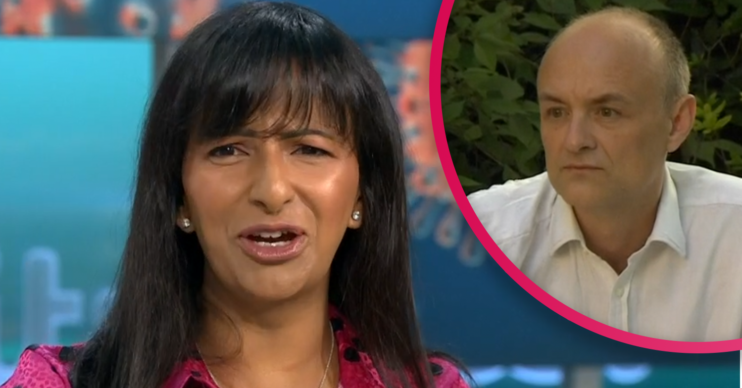 The Good Morning Britain host was corrected by Iain Dale

Ranvir Singh was chastised during an awkward exchange on Good Morning Britain today (May 29).

The GMB presenter was interviewing broadcaster Iain Dale about the Dominic Cummings scandal at the time.

Unfortunately, the discussion didn’t go quite as planned as he accused her of getting her facts wrong.

Ranvir Singh ‘slapped down’ on GMB

She said: “It’s interesting because Durham Police, who are the centre of all this because their final word is what we have to go on, they actually didn’t absolve Dominic Cummings of all guilt.

“They said actually there was indeed, they said it was minor, but there was a breach of the rules but that they wouldn’t be investigating.”

Iain was visibly irritated and then jumped in to correct Ranvir.

He said: “No! Ranvir, you need to get this right.

“So let’s be accurate in this.”

Ben Shephard then attempted to diffuse the situation.

Defending his colleague, he said: “Aren’t we led to believe that in saying there may have been [a minor breach], in legalese, they’re saying there [was one]?

READ MORE: Where are Piers Morgan and Susanna Reid and when are they back on Good Morning Britain?

“There are a number of barristers that have come out and said that’s their way of saying there has been a breach.

“I don’t know if I’ve misunderstood that?”

Iain looked exasperated as he proceeded to correct Ben as well.

“They said there may have been. You can dress it up any way you like but that part of it is now over. The police inquiry is over.

“I’m not defending him but I think at some point the public are going to say there are more important things to talk about it.”

Iain added: “I was looking at Twitter before coming on and there were quite a few saying they would be switching off if the name Dominic Cummings was even mentioned.”

GMB viewers tuning in at home were not at all impressed and were quick to criticise Ranvir.

One wrote: “Ranvir Singh just got slapped down by Iain Dale on GMB. She stated the police had confirmed DC had broken the rules, Iain fervently corrected her.

“It was nice to see her being put in her place.”

Another then added: “@GMB thank god for Iain Dale pointing out to Ranvir Singh what Durham constabulary actually DID say.”

Shortly afterwards, a third tweeted: “GMB Ranvir slapped down …her face was a picture….”

Piers Morgan and Susanna Reid return to host GMB at 6am on Monday (June 1).