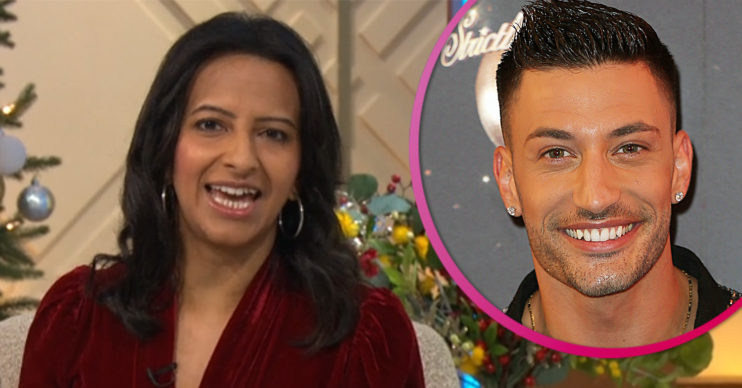 The pair have been surrounded by romance rumours during Strictly

Ranvir Singh sent Giovanni Pernice a flirty text after making a comment about him being naked under his clothes.

The pair have fuelled romance rumours during Strictly Come Dancing after viewers spotted their chemistry.

Giovanni sent Ranvir a sweet message on Monday’s Lorraine to congratulate her on filling in for Lorraine Kelly on her ITV show.

What did Ranvir Singh say about Giovanni Pernice?

Yesterday, Ranvir said after watching Giovanni’s message: “Was it only me who noticed he wasn’t wearing anything under that cardi?”

Charlotte said: “You had a bit of a special message yesterday, but I think it was the choice of outfit that caught your eye, wasn’t it?”

Ranvir replied: “I don’t know what you’re talking about, Charlotte – yesterday was another day. Today’s a new day!

“I noticed he had a lovely kitchen, that’s what I noticed.”

Ranvir added: “I text him, ‘You’ve got a lovely kitchen and you’re alright too’ and he said: ‘Shade’ – quite rightly.”

Adil said: “Nice to see you’re keeping in touch outside of the professional world…”

Ranvir responded: “We [she and Adil] keep in touch outside of the professional world, don’t we?”

What did Giovanni say in his message?

He said: “After smashing the dance floor you’re sitting now in the chair presenting one of the biggest shows on TV.

“Best of luck, I’m sure everything will be fine, we know you can do your job and now you’re a dancer.”

Ranvir previously spoke out about the romance rumours surrounding herself and Giovanni.

She said she and Giovanni “find the idea that we might get hit by the curse very funny”.

In an interview with OK! Magazine, Ranvir added: “You know, Giovanni is so amazing, he doesn’t need me to be sensational!

“The dances are all about being romantic and, of course, we have to make them convincing.”

What did you think of this story? Let us know on our Facebook page @EntertainmentDailyFix.