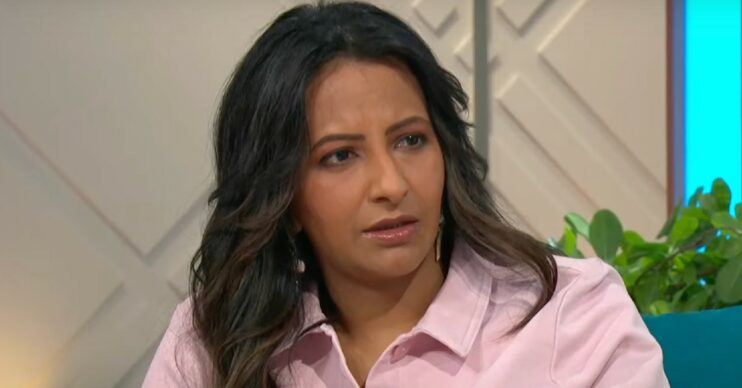 Ranvir Singh made an emotional confession about alopecia during her stint presenting Lorraine today (Friday, April 1).

The Good Morning Britain star bravely showed off her hair loss as a result of the disorder too.

Why did they discuss alopecia on the show today?

During today’s show, Ranvir bravely opened up about her own struggles with alopecia.

Alopecia is a disorder that causes the hair to fall out in parts, or to fall out completely. Matt Lucas is another star who has alopecia.

The discussion around the disorder was sparked following an incident that happened at the Oscars on Sunday (March 27).

During the ceremony, American comedian Chris Rock made a joke about Will Smith’s wife, Jada Pinkett Smith, who shaved her head in 2021 due to alopecia.

During the Oscars, Rock joked that he couldn’t wait to see Jada in G.I. Jane 2. The character of G.I. Jane (played by Demi Moore) famously had a shaved head.

Jada’s husband, Will, stormed the stage, slapped Rock, and shouted at him to “keep my wife’s name out your [bleeping] mouth”.

What did Ranvir Singh say about alopecia?

Ranvir and Dr. Amir Khan spoke about the incident on the show, as well as if it’s ok to joke about alopecia.

“Away from the ugliness of the slap, it’s a serious medical condition that affects millions of people,” Dr. Amir said.

“Lots of people suffer from alopecia,” he said. “Eight million women in the UK suffer from some form of hair loss.”

Ranvir then decided to show Dr. Amir, and the viewers, the results of her hair loss.

“I was at Thorpe Park on Mother’s Day and I feel dreadful about the photographs because your hair’s going backward,” she said.

She then lifted her hair up to show a bald patch at her temple.

The 44-year-old then opened up about her hair loss.

She continued, saying: “It started when my dad had a heart attack and died when I was eight or nine. And it’s never come back.”

She then went on to say that she understands the “real discomfort” of living with alopecia.

After Dr. Amir had spoken about the different types of alopecia there are, Ranvir gave one positive of the Oscars incident.

“If anything, it’s certainly made us talk about what it is,” she said. “Women know they’re not alone.”

Lorraine airs weekdays at 9am on ITV and ITV Hub.