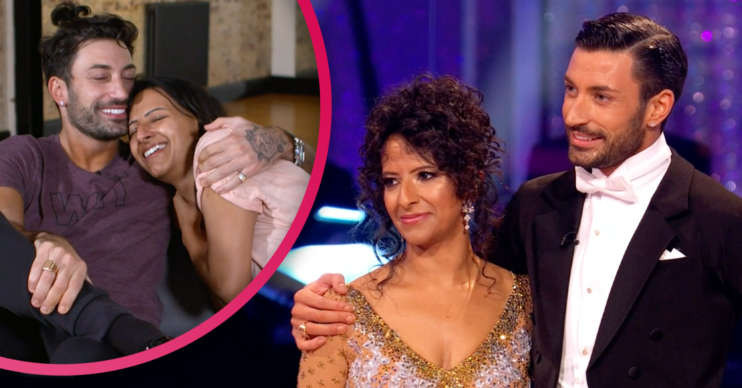 Their sizzling chemistry has captivated the nation

Ranvir and Giovanni have been the talk of this year’s Strictly Come Dancing – and not just for their fancy footwork on the dance floor.

The Great British public and the judges alike have noticed the chemistry between Good Morning Britain presenter Ranvir Singh and dancer Giovanni Pernice.

And, after last night’s tactile performance, viewers are saying Ranvir is “besotted” with the hunky Italian dancer.

Mind you, who can blame her with him in that sailor’s outfit!

What have viewers said about Ranvir and Giovanni?

Rumours have long been circulating about the couple, fuelled in part by her gushing tributes to him on the show and on social media.

However, last night (December 12), viewers noted the closeness between the couple as they cuddled up during a VT and Gio tenderly placed a kiss on Ranvir’s head at the end of a dance.

One viewer said: “She is absolutely BESOTTED with him, isn’t she?”

“Don’t mind me just shouldering ‘KISS! KISS!’ at the TV,” another commented.

“Ranvir has definitely got the hots for Giovanni,” said another.

‘I can’t wait for their wedding’

“I can’t wait for Giovanni and Ranvir’s wedding. They love each other,” declared another.

“Giovanni kisses Ranvir more than my actual husband kisses me,” another revealed.

I can’t wait for Giovanni and Ranvir’s wedding. They love each other.

“Honestly just waiting for Ranvir and Giovanni to profess their love for each other in the final,” said another.

What did Ranvir and Giovanni dance last night?

Last night the couple performed a waltz to Un Giorni Per Noi and a jive to Candyman by Christina Aguilera.

And, while the latter didn’t do much for the judges, it most certainly delighted viewers – mostly for hunky Gio’s costume.

“Catching up on #Strictly and honestly how am I supposed to focus on Ranvir when Giovanni looks like this?!” quipped one.

“Well HELLO Sailor, I couldn’t look at Ranvir, how could I with #Giovanni looking like that?!” said another.

Head to our Facebook page @EntertainmentDailyFix and tell us what you think of the couple.