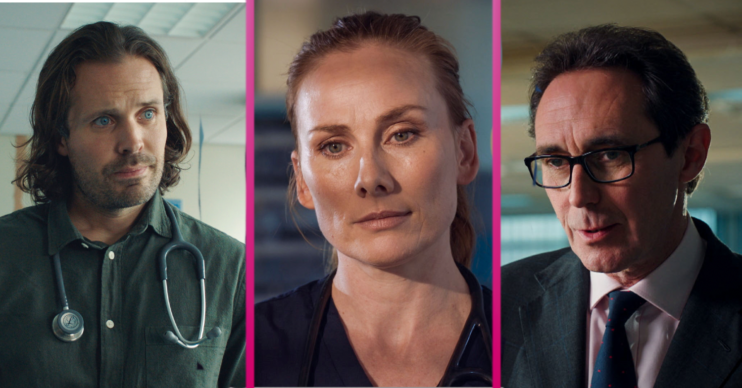 RANKED! The best Holby City characters of all time

Tonight is the final episode of Holby and we can't deal

It’s a sad, sad day as we finally say goodbye to Holby City and its characters tonight.

Fans of the series that has aired since 1999 are preparing for the final episode ever airs tonight.

We can guarantee there will be plenty of drama courtesy of our current faves Jac, Sacha, Elliot, Dom et al.

To celebrate the much-loved show, we’re looking back at the best-ever characters.

Without a doubt, Jac Naylor is the absolute QUEEN of Holby City. She’s been surgeoning (it’s a word, okay?) since 2005, making her one of the longest-running members of staff.

When Jac was introduced, she was ruthless, ambitious and as sharp as her cheekbones.

A bit of an ice queen – as she’s often been called.

But over the 17 years she’s been at Holby, she’s defrosted. A little anyway.

She’s been at the centre of some of the soap’s most salacious storylines, including being arrested for attempted murder.

But it was the pregnancy and birth of her daughter, Emma, that really showed Jac’s softer side.

She was also at the centre of a massive storyline that focused on her mental health in 2019. The story, which saw Jac in a mental health assessment unit, showed the potential mental strain on working mothers.

More recently, Jac’s been battling a brain tumour, which was operated on by her long-term friend Elliot Hope.

Fans were stunned last week when it was revealed that Elliot hadn’t been able to remove the tumour. But he hadn’t let Jac die in theatre as she’d requested.

So will she live to see beyond the final episode? Or will the death of Jac Naylor be the metaphorical death of Holby City?

If Holby is known for one thing, it’s the glamorous but tough as old boots women that frequent its corridors, wards and boardrooms.

Connie has been a regular on both Holby and Casualty. She made a big impact when, on her first day at Holby in 2004, she had sex with Ric Griffin in his office.

She’s well-versed in flirting with – and seducing – her colleagues. As well as Ric, she seduced registrar Will Curtis, despite being married. She had another fling with yet another registrar, Sam Strachan. Connie and Sam have a daughter, Grace, together.

Connie was eventually made director of surgery but quit after a batch of redundancies and almost losing her father in surgery.

Jac took on Connie’s role and was rewarded with a bottle of wine and a pair of stilettos, along with a note saying ‘Fill Them’.

Later Connie returned to the hospital, but working in the A&E department and has been a regular in Casualty.

Probably one of Holby’s most lovable characters is Elliot Hope, a heart surgeon with a huge heart. In a way that means he cares a lot, not in a medical condition way.

In 2006, Elliot accompanied his wife, Gina, to Switzerland. She was suffering from motor neurone disease and wanted to end her life. In a 2007 Christmas special, a depressed Elliot considered suicide himself, but didn’t go through with it.

While he comes across as a bit of a doddery eccentric, Elliot is super smart and was the brains behind the Herzig (artificial heart).

He’s been a brilliant mentor to several of the younger doctors who’ve passed through Darwin and Keller wards.

He’s also been a friend and almost father figure to Jac, returning to try to save her life in  the show’s last episodes.

Elliot was devastated that he was unable to remove Jac’s tumour in Holby’s penultimate episode.

Another one of the good guys is Sacha, a good guy, but known for being unlucky in love.

Before starting his role at Holby, he had a one-night-stand with ward matron Chrissie Williams which resulted in her giving birth to her son, Daniel.

No one was more surprised than Chrissie when Sacha arrived at Holby for a locum position and then a permanent role on the hospital’s Acute Assessment Unit (ACU). Sacha repeatedly tried to win Chrissie over, but his feelings for her were not reciprocated.

Eventually Chrissie falls for Sacha after realising how nice and uncomplicated he is and they end up getting married, even though Chrissie still has last minute doubts.

The couple ended up separating after Rachel, Sacha’s daughter from a previous marriage, was diagnosed with leukemia. Daniel was a bone marrow match and Sacha signed him as a donor without Chrissie’s permission. This caused them to split.

Sacha also had a well-documented mental health battle during his time at Holby. The series worked closely with mental health charity MIND to show a realistic portrayal of male depression.

Up until leaving Holby in 2013, Chrissie was the poster girl for the show.

She was a regular from 2001 until her departure (minus a few breaks for Tina to go on maternity leave).

Like Connie, Chrissie was a bit of a maneater on the wards and mostly ignored the advances of Sacha Levy, father to her son, Daniel.

She seduced most of the male staff and almost married Dan Hamilton, but he revealed he was gay on the day of their wedding. She also had a fling with Oliver Valentine, which resulted in a pregnancy, but Chrissie lost the baby.

Chrissie was held hostage by another ex, Stuart, who sliced her face with a scalpel. He then gagged her as he stitched it up, doing such a bad job, Chrissie was left scarred for life.

She eventually left, after a brief marriage to Sacha, fleeing to Australia with Daniel.

Holby hottie Ollie joined with his twin sister Penny and was an instant hit with the ladies of Darwin, Keller and AAU. He had flings with pretty much any breathing female member of staff, including Chrissie.

But when Penny died during a huge emergency at the hospital, Ollie changed and found love with fellow medic Tara Lo. But tragically, Tara died of a brain tumour the following year, leaving Ollie crashing badly off the rails.

He left Holby for a while but returned as a patient a few years later. His heart was failing, but it was a great opportunity for Elliot to try out his new artificial heart device.

It was a success – yay – and Oliver lived and came back to work at Holby. He even found love again with fiery Zosia. But tragedy struck when Ollie was shot, leaving him with a brain injury and unable to be a surgeon.

Ollie made a brief return for some of Holby’s final episodes, but left to be with Zosia and their son, Arthur, in America.

Henrik Hanssen has been Holby’s CEO since 2010 and has nurtured lots of young talent during his time there.

It came as a shock when it was revealed that the mysterious Henrik had a son who he’d abandoned some 25 years earlier, before he was even born. When Henrik finally met his son, Fredrik, it was far from a happy father/son reunion.

Fredrik worked as a registrar but spent most of his time clashing vehemently with his father before leaving.

That wasn’t the last viewers would see of Fredrik though and he returned some weeks later. With a gun. He shot – and killed – Raf. Left Ollie with a brain injury. Oh and shot Jac too. Eventually Fredrik was shot himself, leaving Hanssen feeling all the guilt.

He also had a shock when it was revealed he was sexually abused as a child. Hanssen began self-harming, leaving viewers heartbroken.

Read more: Holby City spoilers: When does the final episode air? Who will be returning?

Ric was one of the show’s longest-serving surgeons and was involved in a lot of the drama because of that making him one of Holby City’s best ever characters.

Some of his storylines have included losing his son to a heroin overdose and being diagnosed with an inoperable brain tumour.

He was, however, operated on by colleague (and alcoholic) Guy Self, who was under the influence at the time.

His final episode (after over 500!) was in 2020 during a specially commissioned episode which focused on the Coronavirus pandemic.

Ric will return for tonight’s final episode, but no one knows quite what the circumstances are which bring him back to Holby.

Notable mentions for the final ever episode of Holby

Adrian Fletcher – We will forever be in love with Fletch.

Holby’s final ever episode airs on Tuesday 29 March at 7.50pm on BBC One

Who are your favourite ever Holby City characters? Leave us a comment on our Facebook page @EntertainmentDailyFix and let us know what you think of this story.