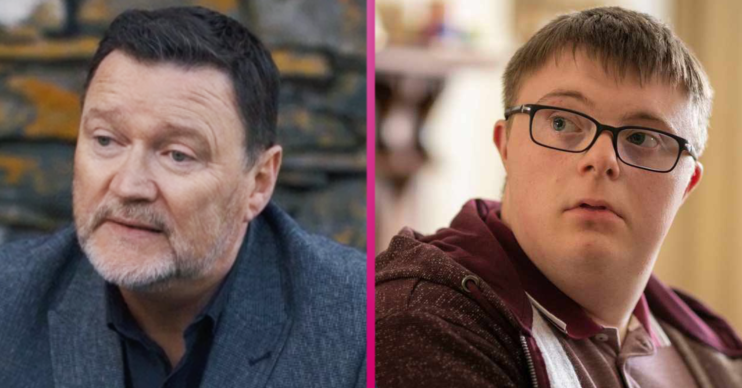 Who is Ralph’s dad Doug in The A Word and why did he leave Louise?

Ralph hasn't seen his father in more than ten years

The A Word is about to introduce a new character – Ralph’s dad, Doug.

In tonight’s episode (June 2), he turns up for the first time in years after hearing his son is getting married to Katie.

But who is Doug and why did he leave Ralph and Louise in The A Word?

Who is Ralph’s dad Doug in The A Word?

Ralph (Ian Puleston-Davies) is a builder who was married to Louise (Pooky Quesnel) once upon a time.

However, they split when Ralph (Leon Harrop) was a teenager.

When the couple decided to separate, he left town and never once came back to see his son.

He’s been away for so long that Doug doesn’t even know about Louise’s battle with cancer.

Understandably, she hasn’t exactly painted him in the best light to Maurice (Christopher Ecclestone).

But in this evening’s episode, he turns up wanting to be part of Ralph’s life again and hopes to make up for the past.

While Louise doesn’t exactly give him a warm welcome, will Maurice gives him a chance to tell his side?

Why did Ralph’s dad leave?

Doug struggled after Ralph was diagnosed with Down’s syndrome.

However, the story isn’t quite as straight-forward as Louise has let on.

During a heart-to-heart with Maurice, Doug explains that Ralph’s news had a big impact on his relationship with Louise.

She resented him for feeling disappointed about Ralph’s diagnosis.

According to Doug, this created a barrier between them while she developed an increasingly stronger bond with her son.

Eventually, he felt like he had been pushed to the outside and the couple jointly decided that he should leave the family home.

Doug claims he didn’t come back to visit Ralph as he feared confusing his son.

He didn’t want him to think he and Louise were reuniting.

But looking back, he now deeply regrets this decision.

Doug turns up in the village after Louise writes him a letter revealing Ralph is getting married.

However, the letter wasn’t an invitation and she isn’t happy when he arrives back in town.

It’s been more than ten years since Ralph last saw his dad – how will he react?

The following day is Ralph’s wedding – but will all go according to plan?

Although, their liberalism is put to the test when Mark (Travis Smith) asks to take Joe (Max Vento) out for an afternoon.