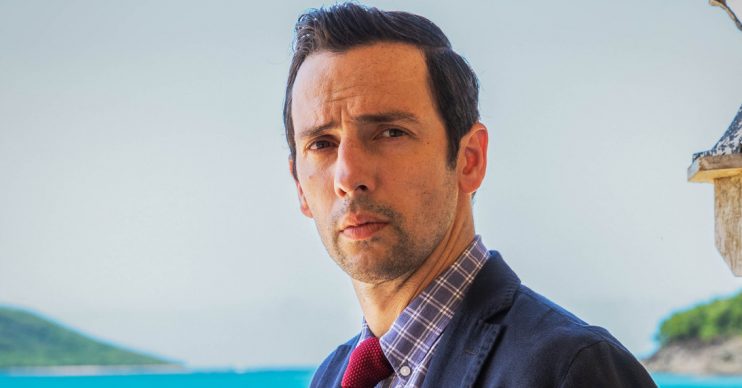 Viewers of smash-hit crime drama Death In Paradise were preparing themselves for the exit of Ralf Little – aka DI Neville Parker – after photographs and clips ahead of last night’s series finale (Thursday February 27 2020) saw the character stage his own leaving party.

But millions breathed a sigh of relief when it was revealed that both Ralf and Neville would be returning in series nine.

It’s bittersweet news for D.I Neville Parker as he’s given the all clear to go home.

Luckily for you, you’re invited to his leaving party tonight at 9pm. Don’t be late. #DeathInParadise pic.twitter.com/b0T1dwocrB

Ralf, 40, took over from Irish comedian Ardal O’Hanlon in the lead role earlier in series nine, but his onscreen character has always made it clear to anyone who would listen that his stay on the tropical Caribbean island of Saint Marie would only be a temporary one.

And you can see why: throughout the series he has complained of allergies and “unusual hypersensitivity to the sun”, which isn’t ideal when you consider the sun-kissed location.

Ahead of last night’s series finale, the show’s official Twitter feed posted a message to fans.

It’s bittersweet news for D.I Neville Parker as he’s given the all-clear to go home.

“It’s bittersweet news for D.I Neville Parker as he’s given the all-clear to go home,” the post read.

“Luckily for you, you’re invited to his leaving party tonight at 9pm. Don’t be late.”

Fans were expecting Neville to say his goodbyes, and fans on Twitter responded to the show’s message.

“Blimey! Last ep already!?! Only seems 5 mins ago Neville sneezed and itched his way to Saint Marie! Hope the leaving do will be a ‘you’re staying instead!’ and hosted by Mayor Bordey.

“We’re not seeing enough of our fave bar owner! Good series though,” one fan wrote.

Another said: “Sad to see the Inspector go, even though I would prefer he could handle his allergies a bit better.”

“Am enjoying D.I Neville too – just needs a bit of sunshine to get rid of those pesky allergies!” a third commented.

Here’s a big sunny Saint Marie thank you to all of you that have tuned in to this series.

We hope you enjoyed your time with us on the island!#DeathInParadise pic.twitter.com/8lMCIi3VLR

When it came to closing leaving party scene, Neville surprised his colleagues by saying: “I’m fed up of living life the way I have to, instead of the way I want to.

“What I’m saying is I’d love to be your DI permanently if you’ll have me.”

He also said in the episode: “Lately I’ve started to worry that I’m going to wake up when I’m 90 and regret every single second that I just made do with my life.”

#deathinparadise felling great empathy with the Commissioner/Uncle Selly with news that Neville wants to stay. "Oh God no, and get me a large rum".

Nah I’ve been a fan of #DeathInParadise since series 1 but since this DI Neville arrived it’s been the worst. He’s so annoying!!! Can inspector Mooney come back please!!! Also can we see more of Cathrine again next season!?

I do hope the island's pharmacy is well-stocked! Looking forward to the next series, you've fitted in seamlessly #deathinparadise #antihistamines #trousersinsocks