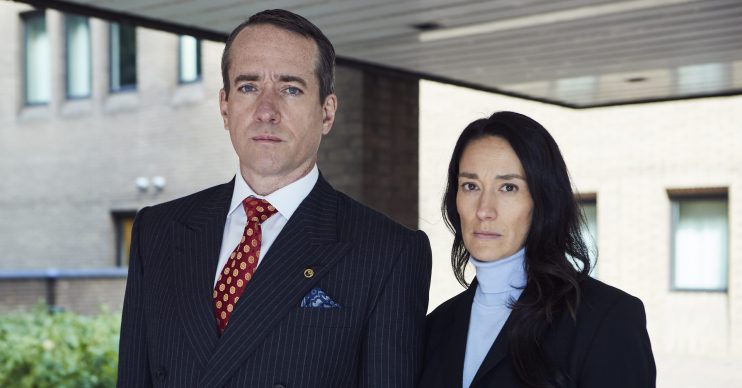 Charles and Diana Ingram were convicted in 2003

Quiz came to its conclusion on ITV last night and has left viewers completely divided over whether Major Charles Ingram and his wife, Diana, were guilty.

The couple were accused of cheating after Charles won the £1million jackpot on Who Wants To Be A Millionaire?

Michael Sheen has won rave reviews for his portrayal of Who Wants To Be A Millionaire? host Chris Tarrant in Quiz, which has dramatised the scandal over three consecutive nights.

Read more: Quiz: Chris Tarrant believes there is ‘no question’ the Ingrams were guilty

A jury found them guilty

Charles’s string of bumbling guesses all being correct soon sparked suspicion amongst the production team.

Tecwen Whittock, a contestant waiting to be next in the hotseat, was allegedly feeding Charles the correct answers by coughing.

The trio were found guilty of ‘procuring the execution of a valuable security by deception’, and each recevied a suspended jail sentence and fines.

Charles and Diana have repeatedly professed their innocence, with the Major even appearing on This Morning after the court case.

“I should make one thing clear and I’ll only say it once and then move on,” he said.

Quiz viewers have doubts over the conviction

Despite the evidence leading to a jury conviction, Quiz has left doubts in the minds of many viewers.

Watching the 3 part #Quiz drama on ITV, superb stuff. Can’t help but feel that @gallantfive and Mrs Ingram may have been stitched up tbh, I certainly struggle to fathom how they could have been judged as guilty beyond reasonable doubt.

I’ve always just assumed @gallantfive was guilty because of what I’d seen / read in the media, but after watching that #Quiz trial I’ve no idea how they found him and the others guilty! 😮

Watched the final part of #Quiz and really enjoyed it. Was pretty convinced of their innocence at the time and now even more so. Don’t know how the jury could come to a guilty verdict

If the facts of the case are as portrayed in #quiz then how on earth were they found guilty. Can’t wait for the appeal. Hope they win! @itv #major #ingram #charles #diana

Always thought @gallantfive was guilty, but now realise my assumptions were made based on a documentary produced by his accusers. Thanks to the truly brilliant #quiz I’m starting to think maybe he didn’t do it after all…..If he won an appeal ITV would now owe him MILLIONS

After all that, especially after that Judith Kepple and Tape G evidence, I’m now convinced that the Ingram’s are not guilty and didn’t cheat, and that ITV and Celador just didn’t want to part with the £1million pounds. 🤷🏻‍♂️ #Quiz #itv

Others are sure they did it

However, others are still absolutely certain the Ingrams, and Tecwen Whittock were cheaters.

The Ingrams were guilty as charged. No doubt. #Quiz

Chris Tarrant on @RadioX this morning. Key takeaway remember that the Ingram is GUILTY as **** and the tv production have dramatised it, so its not 100% true to life! GUILTY! #Quiz #JusticeSystem #Guilty

I’m sorry but Charles Ingram is guilty as sin. #Quiz

Reminder that the Ingrams were convicted of insurance fraud a few months after the Millionaire trial.#Quiz was outstanding television, but the impression of the Major as an honourable, if slightly eccentric, man does not capture the full picture.

I’m staggered anyone could watch Quiz and believe them to be not guilty.

Staggered also that people would base their assumptions on a drama.

Actually, on that last point… #Quiz

All these people tweeting how the Ingrams are innocent over a TV drama, which opened with the line “some details have been changed for dramatic effect” – they were found guilty, end of.#Quiz

Charles Ingram himself has been vocal on Twitter since the drama began, insisting the tape played to the jury of the coughing had been edited.

Wow. It’s seems so obvious to me too. It’s extremely frustrating that it’s not obvious to most people worldwide. The press on Day 1 were rolling about laughing because the coughing was so ‘obvious’. We lost because Tape G was played many times. Few can get passed the tape. #Quiz

Many people assume the court then broadcast version on TV & You Tube compares with a normal broadcast. The editing of Tape G is complicated and nothing about it has ever been properly explained to the public, or jury. As Whittock said on watching, ‘even I think I’m guilty’. #Quiz

Charles has also hit out at Chris Tarrant, insisting in a reply to a follower that Chris should have heard the coughing “with all his experience.”

We were good until he was told otherwise. Tarrant wants to protect his legacy, his team, and the integrity of the UK production. I get that, but there is the more important issue of justice…, including all public that spent millions phoning and appeared. Who protects us?

Tarrant should have been a defence witness. I think he’s proven he will do anything to protect his legacy, the famed UK production and his ‘family’ regardless of what they have done.
It says much that he feels no responsibility toward the people who apply and appear on the show.

Another follower asked how Charles could stand Tarrant’s alleged “constant jibes” at him.

Charles responded that “Tarrant is not the person people think he is.”

Because he lied to & cheated on his wife who likes rabbits. Tarrant is not the person people think he is. TV does that. He suffers from delusions of grandeur and despite no proof I cheated he keeps harping on to protect his mates. I’m sad for him. p.s., I’m still calm. #Quiz

The Ingrams to appeal

The Ingrams’ lawyer, Rhona Friedman, has revealed the couple are appealing their convictions.

They want them overturned on the basis that new audio analysis casts serious doubt on the evidence used to prosecute them.

She will allege it may have been altered before being presented to the jury.

“Speaking to them and meeting them, I just know that they did not do it,” Ms Friedman told The Guardian.

Read more: Quiz vs real life – who are the people behind the TV drama?