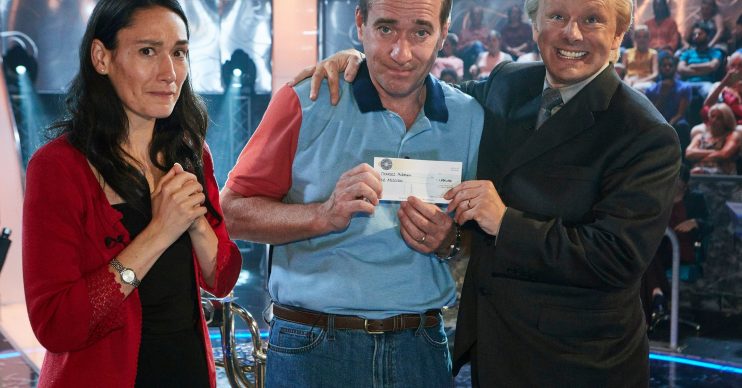 The new ITV drama explores the Who Wants To Be A Millionaire? 2001 cheating scandal

The Quiz cast are dead-ringers for the characters they play in real life.

Matthew Macfayden and Sian Clifford portray married couple Charles and Diana Ingram in the new ITV drama – and the casting couldn’t have been better.

Here, we compare the cast of Quiz to their real life characters so you can check out the uncanny resemblances for yourself…

Matthew Macfayden will be taking on the lead role of Charles.

The British Army Major wasn’t the mastermind of operation cheat, but he was certainly the face of it.

He was the one who sat in front of Chris Tarrant and faced the cameras as he deceived his way to the top.

Although he’s not in the first episode too much, expect to see plenty of him in parts two and three.

Sian may look familiar as she plays Phoebe-Waller Bridge’s sister in Fleabag.

In Quiz, she takes on the role of Diana – the school teacher who pushes her husband Charles to compete in Who Wants To Be A Millionaire.

This is after both she and her brother compete and win £32,000 each.

With so much experience in taking part, she comes up with a strategy to ensure her hubby wins the jackpot.

Mark takes on the role of Paul Smith – the man who invented Who Wants To Be A Millionaire.

When pitching the show to ITV, he offers to go halves on the prize money should any contestant scoop the jackpot.

He’s suspicious of the British Army Major almost immediately – but it’s not an easy job proving there’s been any wrongdoing.

Michael plays the role of Who Wants To Be A Millionaire host Chris Tarrant.

The star refuses to be believe that Charles has cheated his way to the top at first.

During the game, he is oblivious to the coughing scandal.

But when he watches the tapes back, he soon realises the shocking truth.

Michael take-in the role of Tecwen.

He appears in episode two as a fellow contestant who has also used underhand tactics to ensure his place on the show.

After agreeing a percentage of the £1 million payout, he helps Charles to correctly answer questions by coughing.

However, his coughing outbursts aren’t quite as subtle as he thinks.

Chris Tarrant ITV Who Wants To Be A Millionaire?