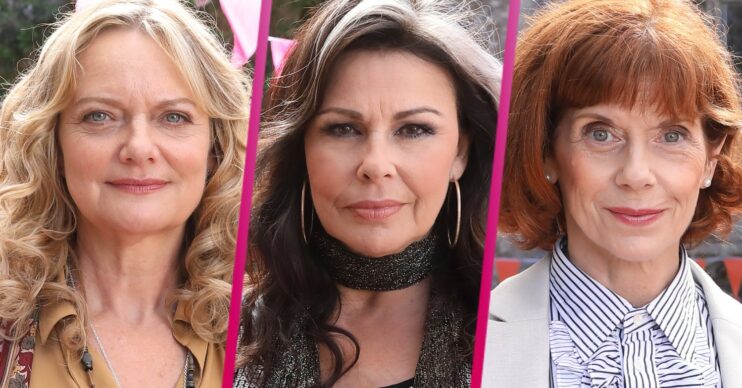 Queens of Mystery on C5: What’s it about, who’s in the cast and how many episodes is it?

Queens of Mystery has cosy crime drama written all over it – and a cast of popular actresses including TV favourite Julie Graham.

What’s not to love?

The series launches on Channel 5 on Saturdays, having already aired on Acorn TV.

It marries comedy and mystery, and is perfect Saturday night fun.

What is Queens of Mystery on C5 about?

Queens of Mystery is an off-beat, tongue-in-cheek take on the traditional world of cosy crime.

She is newly promoted to Detective Sergeant and assigned her hometown of Wildemarsh for duty.

All normal-ish so far…

But there’s a complication x 3.

Beth, Cat, and Jane believe they can help solve her cases…

But when a murder takes place at the local crime-writers’ festival, Mattie struggles to keep the well-meaning amateur sleuths out of the investigation!

In episode one, entitled Murder in the Dark: First Chapter, DS Stone returns to her home village of Wildemarsh.

Her first investigation is the murder of a bestselling author, who has met his maker at a gorgeous country pile.

Queens of Mystery cast: Is series based on a book?

Queens of Mystery is an original series, created and written by Julian Unthank.

Julian has also written for shows such as New Tricks, Robin Hood and The Bill.

He wrote five series of ITV hit Doc Martin, including the upcoming series 1o set to be released in October 2022.

How can I watch the show?

Queens of Mystery is now available to watch on Channel 5.

All episodes will be available to watch on My5 after transmission.

Acorn TV subscribers have had access to this playful detective drama since 2019.

But Channel 5 is now, rather wisely, bringing it to a wider audience.

How many series are there?

There are currently two series of Queens of Mystery.

Both series are available to watch on Acorn TV.

The channel released the first series in 2019.

Queens of Mystery was renewed for a second series in March 2021, and premiered in November 2021.

A third series of Queens of Mystery has yet to be confirmed.

How many episodes is Queens of Mystery series one?

Series one of Queens of Mystery is six episodes.

Each episode is approximately 45 minutes once you’ve fast forwarded through the adverts.

The second series of Queens of Mystery is also six episodes.

Who narrates the series?

She narrates all 12 episodes of the cosy crime drama so far.

Of course, actress Juliet is perhaps best known for playing Paula Paxton in Bend it Like Beckham.

She recently played Natasha Carlton in Death in Paradise, and Dorothy Venn in the crime drama The Long Call.

Other roles include Carol in Out of Her Mind, and Lady Cassandra Eltham in Riviera.

Where is Queens of Mystery set? Is Wildemarsh a real place?

Queens of Mystery is set in the fictional picturesque English village of Wildemarsh.

Filming for the first season took place in Kent, specifically in Stone Street in Cranbrook.

Production used Lympne Castle as Hiddledean Castle in the fictional town of Wildemarsh in the Murder In The Dark episode.

Who plays Mattie Stone in the Queens of Mystery cast?

Actress Olivia Vinall has been acting ever since 2011, when she appeared as Cassie Lock in Doctors.

She appeared in Casualty, Doctor Who, Holby City, and Midsomer Murders before winning the role of Carrie in Apple Tree Yard in 2017.

She went on to portray Laura Fairlie / Anne Catherick in the 2018 series The Woman in White.

Olivia subsequently won the role of Matilda Stone in series one of Queens of Mystery.

Why did Olivia Vinall leave the cast of Queens of Mystery?

But Florence Hall, 34, replaced her in the second series due to a scheduling conflict.

Before winning the role of Mattie, Florence had played Mindy in The Princess Switch franchise, and Georgina in Lovesick.

Julie Graham stars as Cat Stone in the cast of Queens of Mystery.

She’s arguably the most well known TV face in the cast.

The Scottish actress, 54, has been on our screens for nearly four decades!

Memorable sitcom performances include Megan Hartnoll in At Home with the Braithwaites, and Mary Gilcrest in William and Mary.

She went on to play Gillian Magwilde in Bonekickers, Abby Grant in Survivors and Commander Lisa Kennedy in The Bill.

Julie played Rhona Kelly in Shetland from 2014 to 2019, but was sadly replaced in the most current series.

Like onscreen sister Julie, Siobhan has been acting since the 1980s.

She’s played DS Maureen Connell in Between the Lines, Shona Spurtle in The High Life, and Sharon in The Smoking Room.

She’s also starred as Maeve Brown in EastEnders, CSE Lorna Hart in The Bill, Beth in The Replacement, and Derran Finch in Unforgotten.

Over the years, viewers will have seen her in Poirot, Casualty, The Bill, Doctors, DCI Banks and many more.

Who else stars in the cast of Queens of Mystery?

Reviews for the cosy crime drama

Radio Times’ David Brown describes Queens of Mystery as “a delightful thing – traditionally plotted, yet tongue-in-cheek and with a premise that’ll prove irresistible to lovers of mystery fiction”.

Michael Shonk at Mystery File said: “It is difficult to watch the opening of new British TV mystery series Queens of Mystery without thinking of one word – whimsical.

“With visions of Pushing Daisies dancing like sugar plums in my head, I settled back and enjoyed this light contemporary murder mystery.

“What makes Queens of Mystery so much fun is how it uses the tropes of the British TV traditional murder mystery and gives them a dry humorous twist.”

John Soltes from Hollywood soap box is also a fan, saying: “Queens of Mystery, an original show from Acorn TV, is a fun, colourful and cleverly written murder mystery that employs the talents of many superb actors.”