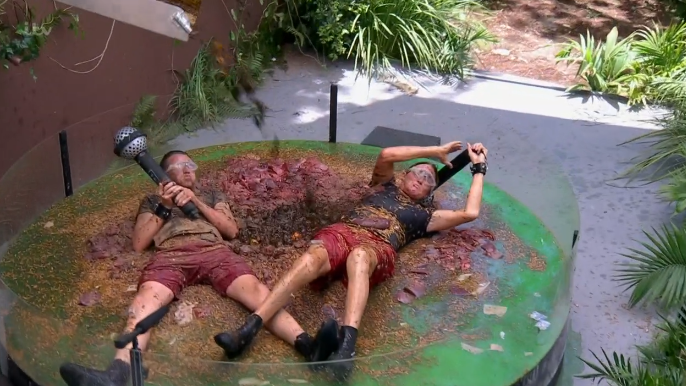 Others thought it was hilarious!

Viewers of I’m A Celebrity were left feeling ill during tonight’s Bushtucker trial.

Caitlyn Jenner and Roman Kemp took on Slop of the Pops, in which they were strapped to a revolving platform and were covered in fish guts, cockroaches, mealworms and more.

There were six rounds and the pair had to collect stars by hitting disco balls piñatas that would hover above them with giant microphones.

Songs were played and the pair were covered in a string of vile items.

I can’t even watch this, my gag reflex is in overdrive.

They managed to get a full house and bagged eight stars for camp.

After the trial, Caitlyn refused to speak to hosts Ant McPartlin and Dec Donnelly as she stood there smelling and covered in gunge.

Roman said: “It was absolutely rancid, one of the most disgusting smells.”

Viewers were left feeling slightly “queasy” over the trial, with some people forced to switch off.

One person said on Twitter: “This is not a funny trial. This is beyond cruel, I mean I’m gagging I can’t imagine how they felt.”

Another wrote: “Sorry but this is not Entertainment… it’s absolutely disgusting torture!! This is really beyond its sell by date cant be bothered anymore… SWITCHED OFF.”

A third added: “I can’t even watch this, my gag reflex is in overdrive.”

This is not a funny trial. This is beyond cruel, i mean I’m gagging I can’t imagine how they felt 🤢 #ImACeleb

#ImACeleb sorry but this is not Entertainment .. its absolutely disgusting torture!! This is really beyond its sell by date cant be bothered anymore ..SWITCHED OFF

I can’t even watch this, my gag reflex is in overdrive 🤢🤮🤢🤮🤢🤮🤢 #imaceleb2019 #imaceleb #imacelebrity #ImACelebrityGetMeOutOfHere

That trail was disgusting 🤢 #ImACeleb

a big massive well done to @romankemp and @Caitlyn_Jenner for smashing the most disgusting Trial I’ve ever seen on the series, they done so well to get all the stars #ImACeleb

Others found it hilarious to watch.

The most horrific but hilarious trail so far! 😂🙌🏼 #ImACeleb

This trial is absolutely hilarious 😂#ImACeleb

Haha this is the most hilarious trial. I’ve seen…. Bloody brilliant 😂 #ImACeleb