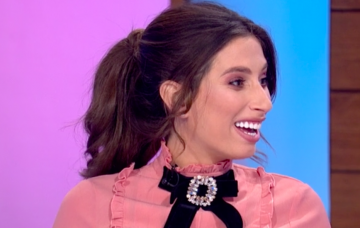 The Loose Women is having a girl first, says the psychic

Between them they’ve already got three kids, but Stacey Solomon and Joe Swash could be nearly doubling their brood, if a new prediction is to be believed!

Psychic Sally Cudmore – who foresaw the Loose Women star’s pregnancy – reckons the TV couple will have a girl – and that there will be another baby to follow!

Footage from a 2017 episode of Loose Women sees Psychic Sally Cudmore telling Stacey, 29: “I am going to your stomach area, I do see pink for a girl around you, a pregnancy. And there is a ring going on your finger.”

And speaking in a new interview with The Sun, Sally says: “I told her she was going to have a baby, but she was having none of it. She was happy about the engagement, but not the pregnancy.

“I left that day knowing I was right, and that time would tell. I’m really happy for them. Secretly that’s what she wanted all along.”

“I definitely feel pink for a girl around her. I feel their marriage will be a happy one, but also think, after this baby, Stacey will fall pregnant one more time.”

She also said what we all know to be true, that the couple – who announced their happy pregnancy news last week – will make wonderful parents.

It follows the lovely baby news from Joe, 37, and Stacey – who are already parents to Harry, 11, Zachary, 10, and Leighton, six, from previous relationships.

Joe revealed the pregnancy on Instagram, writing: “I can’t begin to describe how happy we are to be able to share this wonderful news. We’ve been so blessed with 3 incredible children that we’ve had the privilege of raising and we are forever grateful to have the chance to become parents to another wonderful child.

“It’s all very overwhelming and emotional and we couldn’t be happier right now.”

The former X Factor finalist followed it up with a tweet that read: “Words aren’t working for me right now so ditto @realjoeswash 😭💛.”

Fans have rushed to send their love to the pair, who have been dating three years. And they sent even more after the psychic prediction.

Others were sceptical about the psychic, saying: “Doesn’t take a psychic to know that was going to happen!” Another commented: “2 yers ago hardly soon. I wouldn’t be boasting about making that prediction.” A third added sarcastically: “Young woman in a relationship with a young man gets pregnant and gets married! And in other shock news…”

We’re looking forward to so many hilarious and sweet pregnancy updates from these two.

Do you think they could handle two more?! Leave us a comment on our Facebook page @EntertainmentDailyFix and let us know what you think.