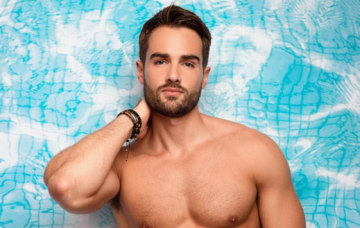 He starred in steamy pop video in 2016

We were as surprised as anyone when Paul Knops revealed to Laura Anderson on last night’s Love Island that he’d starred in a Britney Spears video.

But it turns out his story was 100 per cent true – and we have the pictures to prove it!

If Laura was jealous upon hearing Paul’s confession, she’s likely to be even more so if she ever gets round to watching him in the clip for Britney’s 2016 hit Make Me.

In the eye-watering promo, the Bournemouth-born hunk, 31, is seen stripped down to his waist, locking lips and generally getting steamy with the US pop sensation.

But she appeared slightly less pleased when he began regaling her with details of his escapade with Ms Spears.

Explaining that he’d been offered the part in the video during a trip to Los Angeles, Paul boasted: “We kissed and then there’s a bit where I’m on top of her in bed.”

While she laughed his anecdote off, Scottish beauty Laura, 29, was quick to point out that Britney, 36, is “pushing 40”.

Pushing 40 or not, Laura can’t really argue with the fact that… it was Britney Spears!

Meanwhile, Laura’s DAD is sure to surprise Love Island fans by sharing an old picture of the star in which she looks rather different.

David Anderson posted the 2003 snap to his Instagram page. In it, a 15-year-old Laura is seen sporting a brunette bob and cowboy boots.

Alongside it, Anderson Snr wrote: “Here’s a pic of Laura – 2003ish. She really loved her dancing comps. She hated coming second.

“Think she’s goin to kill me for this. A don’t care, am so proud of her. Thanks again to everyone for their support.”

What did you think of Paul’s Britney revelation? Leave us a comment on our Facebook page @EntertainmentDailyFix and let us know!