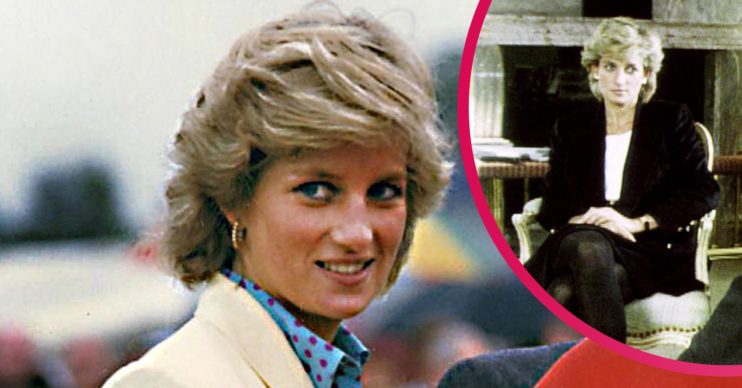 Princess Diana: What did she say during her BBC Panorama interview?

The royal's explosive interview with Martin Bashir was 25 years ago

Diana: The Interview That Shocked the World will explore the princess’ famous BBC Panorama conversation almost 25 years on.

Airing on Channel 5 this weekend (Sunday, October 11), the documentary is set to take viewers back to Princess Diana’s interview with reporter Martin Bashir.

A staggering 22.8 million people in Britain watched as the late royal spoke candidly about her marriage with Prince Charles and life in The Firm.

Read on to find out more about Diana‘s Panorama episode.

When did Prince Charles meet Diana?

Charles and Diana first met in November 1977. At the time, Diana was just 16 years old and Charles was dating her older sister, Sarah.

They were introduced to each other during a grouse hunt at Althorp, Diana’s family’s home.

What is the age difference between Prince Charles and Princess Diana?

What was the ‘three people in this marriage’ line in the BBC Panorama interview?

During her Panorama interview, Diana famously said: “Well, there were three of us in this marriage, so it was a bit crowded.”

Read more: New Princess Diana film set to tell ‘one of the saddest stories to ever exist’

She was responding to Martin’s question about Camilla, now the Duchess of Cornwall.

He had asked: “Do you think Mrs Parker Bowles was a factor in the breakdown of your marriage?”

When did Princess Diana have bulimia?

Diana told Martin Bashir she had bulimia for “a number of years”.

She said, explaining how a lack of self-esteem led to the eating disorder: “I didn’t like myself, I was ashamed I couldn’t cope with the pressures. I had bulimia for a number of years, and that’s like a secret disease.

“It’s a repetitive pattern which is very destructive. It was my escape mechanism.”

What did Andrew Morton’s book reveal?

Andrew Morton’s biography, Diana: Her True Story, included stories about Diana’s turbulent relationship with Charles, his affair with Camilla and the princess’ attempts at suicide, as well as her bulimia.

Well, there were three of us in this marriage, so it was a bit crowded.

After her death in 1997, Andrew revealed that much of the book was actually based on secret tape recordings Diana made to help him get her story across. The book was subsequently re-released as Diana: Her True Story.

What did Diana say about Camilla Parker Bowles on Panorama?

Aside from her famous line about there being three people in their marriage, Diana also said that she knew about Charles renewing his relationship with Camilla in 1986 – but “wasn’t in a position to do anything about it”.

Asked what evidence she had, Diana answered “a woman’s instinct”. She had also heard from “people who minded and cared about our marriage”.

She said it had a “pretty devastating” effect on her, including sparking a “feeling of being no good at anything” and being “useless”.

Who is James Gilbey and what was Squidgygate?

Lotus car dealer James Gilbey was a childhood friend of Diana and her rumored lover during her marriage with Prince Charles.

Squidgygate refers to controversy over the pair’s pre-1990 telephone conversations and how they were recorded.

During their chats, James affectionately called Diana “Squidgy” and “Squidge”.

The Sun newspaper publicly revealed the tapes’ existence in 1992.

Who was James Hewitt?

James Hewitt, a former officer in the British Army, had an affair with Princess Diana. He disclosed their secret relationship.

He has previously had to deny rumours that he is Prince Harry’s father.

Diana confessed to their affair in the BBC Panorama interview, telling Martin Bashir: “I adored him. Yes, I was in love with him.”