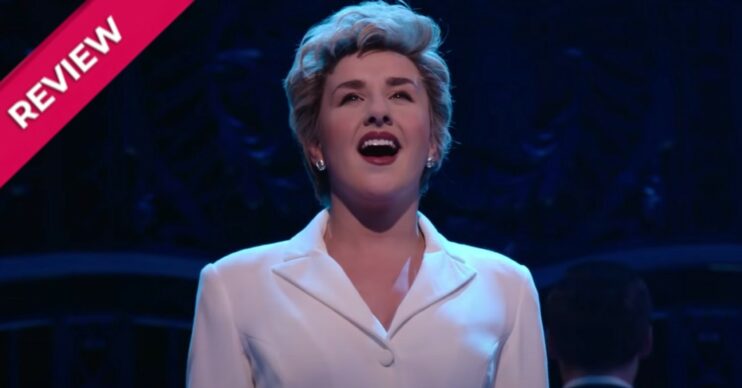 Diana: The Musical review: What on earth did we just watch?!

This is certainly... something.

If you thought the world couldn’t scrape the barrel anymore when it comes to making money of Princess Diana’s legacy – may I present to you, Diana: The Musical.

Diana’s life is turned into an all-singing, all-dancing tale of a girl underestimated, made especially for a US Broadway audience. Now, it’s on Netflix for the world to see.

It’s hard to explain how you feel when watching it. On one hand, it should be destroyed and never spoken of again. But then, on the other, there are moments that make it a camp classic.

But the hilarity some of the scenes have is not deliberate. Diana: The Musical is made with the most saccharine intent. Which makes it all the more painful.

Act one is about Charles and Diana’s doomed marriage. The second, her developing her life as a woman in the spotlight on her own terms.

But the framework of the show is clunky. It dedicates a large chunk of time on Charles and Diana’s first date. But then they zoom through her giving birth to two children and self-harming in one musical number.

No one in this show is likeable. Not even Diana. Diana spends a large amount of her time singing about how great she in comparison to her counterparts. Which is the opposite of the Diana people love.

However, you can’t help but laugh and get some enjoyment out of James Hewitt coming out through the floor, shirtless on a pummel horse screaming his own name.

It then devolves into a series of double ententres as women lust after him and his ‘horse’. The number is a highlight in a world full of duds.

Read more: What to know what to watch? Check out our latest reviews

Actor Gareth Keegan seems to be the only person who seems to know what show he’s in.

But let’s be honest – it took us several stops and starts to even get through this for the sake of this review. It is painful to watch and the dialogue and lyrics they use just beat you over the head with their bluntness and painful simplicity.

If we heard Diana referred to as a ‘tart’ by The Queen or have Camilla remark on how ‘perfect’ she is one more time there may have been screams.

We may be more on board the show was weird satire, but it isn’t. Despite the fact that, at one point, they sing about “a thrilla in Manila with Diana and Camilla” amid a showdown. In another, a lamenting Diana says her failed marriage “serves her right for marrying a Scorpio”.

At least it dedicates a number to that little black dress, dubbed her ‘feck you’ dress.

It has already been compared to The Producers’ deliberately offensive film Springtime for Hitler. Fans are not incorrect in that parallel.

Is Diana: The Musical worth the watch?

Diana: The Musical is definitely something you need to see to believe. Though it’s likely not in the way that the creators wanted.

It runs about half an hour too long, it isn’t actually that accurate, and there are moments that are pure unwatchable.

But then there are these glimmers that are so ridiculously camp you can’t help but laugh at it.

However, it feels both well-worn territory and far too soon to have a musical on this woman’s life.

Between the two movies, the documentaries, The Crown, and now this, it feels like time we just let the People’s Princess rest in actual peace.

Diana: The Musical is available now on Netflix.