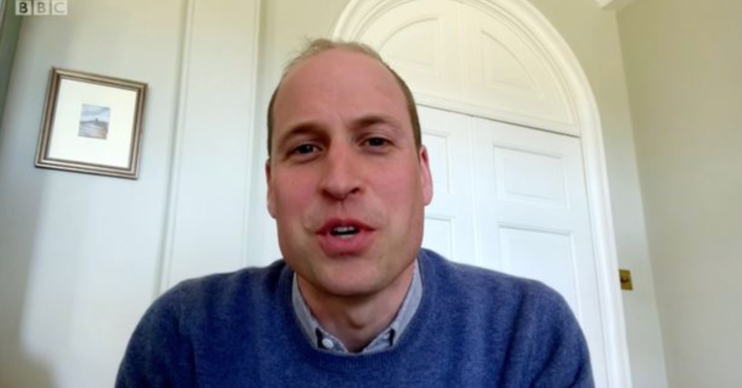 Prince William led the nation celebrating all that is great and good during BBC One’s The Big Night In this evening.

Everyone knows the drill by now: 8pm on Thursday is the time to open the windows or stand on our doorsteps and show our appreciation to the nation’s NHS and care workers.

William and wife Kate were joined by their three children George, Charlotte and Louis – who is celebrating his second birthday today.

Also giving a round of applause were the Prince of Wales and Duchess of Cornwall.

Ahead of the clap, William took part in a brilliant Blackadder comedy sketch opposite Stephen Fry. He played Lord Melchett (the grandson of his famous character General Melchett).

He offered the Duke of Cambridge some advice on how to home-school his young family.

William revealed that going without EastEnders was proving to be hell.

He also claimed he wasn’t wearing any shoes, socks or trousers while making the video call!

The sketch was part of BBC’s One’s The Big Night In, which is celebrating the acts of kindness and hope during the COVID-19 pandemic.

The special night of programming is the first time the BBC’s biggest charitable partners, BBC Children in Need and Comic Relief, have come together.

The aim of the evening is to celebrate and reward those going the extra mile to support their communities in these troubled times.

The government has pledged to match however much money tonight’s show raises.

Highlights of the show so far have included Dawn French bringing back the Vicar of Dibley, Catherine Tate revisiting Lauren opposite teacher David Tennant and Miranda giving tips on surviving self-isolation.

Lenny Henry, Matt Baker and Davina McCall are among the presenters.

Let us know what you think of the show on our Facebook page @EntertainmentDailyFix!