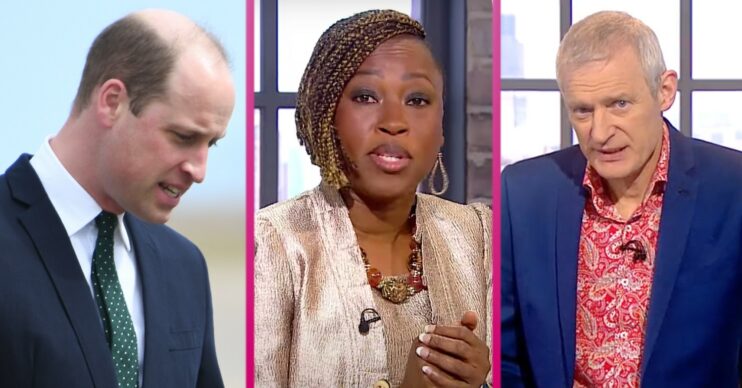 Prince William addressed slavery and condemned it as “abhorrent” on Wednesday evening (March 23).

He made his comments during a dinner held by the Governor General of Jamaica as Prince William and Kate continue their royal tour of the Caribbean.

However, when William’s remarks were analysed earlier today (Thursday March 24) on The Jeremy Vine Show, guest Dr Shola Mos-Shogbamimu dismissed them as “insulting”.

Prince William on slavery: What did he say?

William said he agreed with previous comments made by Prince Charles, indicating Britain will be tainted forever by its previous role in the slave trade.

He said in his speech: “Slavery was abhorrent. And it should never have happened.

“While the pain runs deep, Jamaica continues to forge its future with determination, courage and fortitude.

“The strength and shared sense of purpose of the Jamaican people, represented in your flag and motto, celebrate an invincible spirit.”

How did Shola Mos-Shogbamimu react to Prince William’s comments?

After footage of Prince William’s words aired, host Jeremy Vine suggested they could be interpreted as a “non-apology apology”.

Turning to Dr Shola, he asked whether the royal should have apologised more clearly.

She responded: “Absolutely. That was not even an apology. He ‘acknowledged’ something – and I think it is insulting.”

Dr Shola insisted the debt could never be repaid to those who have suffered due to slavery.

“People keep on talking about Britain leading the way in the abolition of the slave trade,” she said.

“What Britain then did was go from stealing millions of individual Africans to colonising entire nations, where they committed mass crimes. They stole the wealth and national resources.

“I don’t care if it is £300 million or billion. Britain cannot possibly afford to pay back what it owes to African nations. It owes far more.”

Dr Shola added: “The reason why Prince William, Prince Charles and the royal family don’t want to apologise is because they don’t want to pay for their crimes and the fact they are still benefitting from them.”

Viewers reacted in many different ways on social media.

Some insisted there is no need for an apology, while others thought the royals are wrong for even hinting at a sorry.

Others strongly attacked Dr Shola for her position.

“I think he has said enough. You can apologise without saying sorry,” one social media user wrote.

Another deflected: “Finding countries not involved in slavery would be a much shorter list.”

Someone else stated: “No. We shouldn’t be apologising for the actions of our ancestors.”

And someone else echoed that: “We are only responsible for our own actions!”

While someone else fumed: “William is an idiot for apologising.”

And yet another person seethed: “Shut up William, you’re becoming more like Harry.”

The Jeremy Vine Show airs on Channel 5, weekdays, at 9.15am.