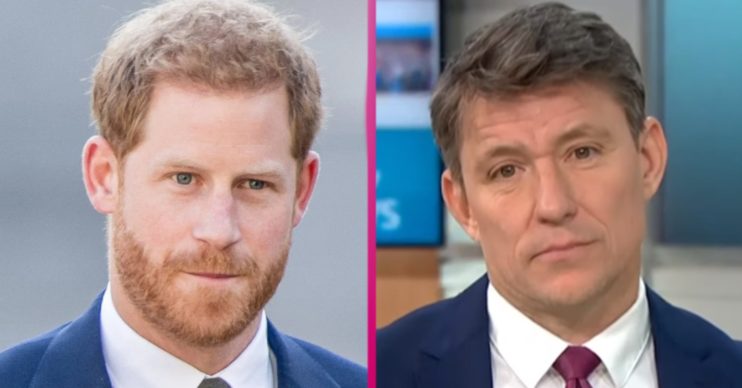 He isn't impressed with the Duke's podcast appearance

Prince Harry has been slammed by Ben Shephard for his remarks about his family on Dax Shepard’s podcast.

The former senior royal was a topic of debate on the ITV programme earlier today (May 14).

During the show, Ben was joined by Kate Garraway as the pair discussed his appearance on the podcast.

While Ben is usually calm and collected on the show, he didn’t hold back today.

He believes the comments have come at an “impossibly difficult” time for the royal family.

Ben shared: “It’s a strange one isn’t it? Do you know the one thing that I’ve heard most of all – a young dad.

“And doing that thing you do when you’re a young dad, going, ‘I’m not going to do the same as my parents, I’m going to do things differently.’

“And I just wonder what it would be like to talk to him in five years time.”

Although he didn’t stop there!

In addition, Ben ranted: “When you start with ‘I don’t want to point the finger’, and then immediately points the finger.”

He’s been a parent for five minutes

She added: “Does he mean to point the finger though? I don’t know that he is doing it intentionally. The repercussions would be that it’s certainly seen as that as Prince Charles.”

Later on, Ben added: “When did he become an expert? He’s been a parent for five minutes. What is he doing talking about being a parent? That’s what I find really difficult.”

Criticising the Duke, one wrote: “It’s just another Harry & Megan playing the victim self promo card. They will do and say anything for publicity.”

A second added: “Absolutely shameful Harry. He says he doesn’t want publicity yet he’s doing more interviews moaning about his life. He is using his royal connections most definitely to make his own money. If he wasn’t royal would he have got this far already without it?”

However, others were quick to defend Harry’s comments.

One tweeted: “Really angry at the negative comments regarding Prince Harry. We keep being told to talk about mental health and the moment Harry does he is slammed down, I think he is brave to speak out.”

Another shared: “This is why so many people suffer from mental health issues. When you speak up people are quick to judge. I don’t even think these people listened to the podcast either.”