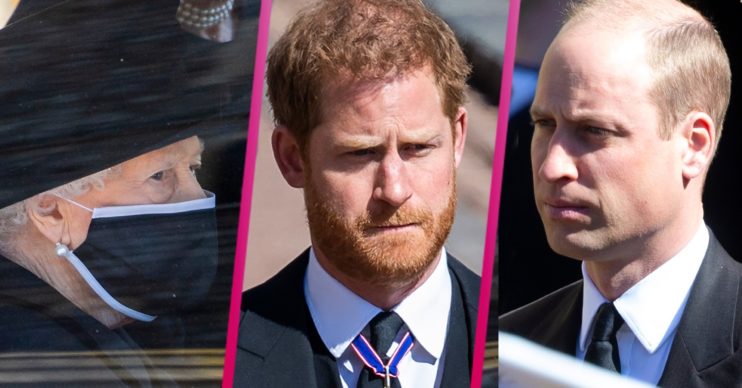 Prince Harry is said to have met the Queen privately during his brief time back in the UK.

Harry flew back to London to attend the funeral of his grandfather Prince Philip and is said to have met his granny the Queen “at least twice” during that time.

According to royal biographer Omid Scobie, Harry also met with dad Charles and brother William after the funeral.

Harry and Queen: Did Prince Harry talk to the Queen?

Omid, the author of Finding Freedom, has claimed the Duke of Sussex met with the Monarch a number of times, after he flew in to mourn his grandfather.

In an article for Bazaar.com, Omid reported that a source claimed: “The love and respect he has for his grandmother will always be unwavering.

“This trip was to honour the life of his grandfather and support his grandmother and relatives.

“It was very much a family-focused period of time.”

Prince Philip’s funeral took place at St George’s Chapel in Windsor Castle and marked the first time Harry had come face-to-face with his family since officially stepping back from his royal role in March 2020.

Harry and Queen: Has the family rift been healed?

According to the writer: “Saturday broke the ice for future conversations.”

However, all is still not well.

The source said “outstanding issues have not been addressed at any great length”.

They added: “The family simply put their issues to one side to focus on what mattered.”

The self-appointed expert also confirmed that Harry stayed at Frogmore Cottage in the grounds of Windsor Castle while he was in the country.

In addition, Harry saw a number of family members including Princess Eugenie and her newborn son August Philip Hawke Brooksbank.

Who is Omid Scobie?

The book tells the story of Harry and Meghan’s decision to step away from royal life.

However, it is an unauthorised biography and is not thought to include input from the couple.

Where is Prince Harry now?

Harry returned to the US yesterday, one day before his grandmother’s 95th birthday (on Wednesday April 21 2021).

He is now reportedly back in his home of Montecito, California, alongside his pregnant wife Meghan Markle.

Royal fans hoped he might stay to see his grandmother on her birthday as he’d reportedly bought an open-ended ticket.

But, sadly, he returned to the States after nine days in the UK.

Omid claims Prince Harry will return to the UK in July for the unveiling of a statue of his late mum, Princess Diana.

If he does return for the ceremony, it is unlikely Meghan will join him as she’ll be a mum for the second time by then.

Their second child is expected around June time.

Meghan announced that they were having a girl during her interview with Oprah Winfrey.

She did not return to the UK for Prince Philip’s funeral as a result of her advanced pregnancy.