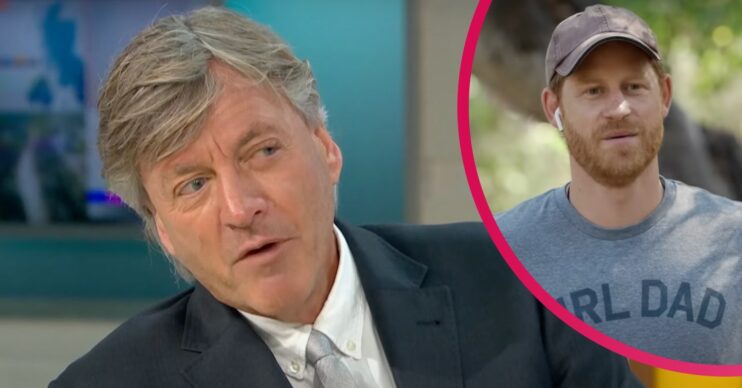 The Duke of Sussex showcased his acting skills in a new advert for travel firm Travalyst, but Richard wasn’t impressed!

The Duke of Sussex gave royal fans a glimpse at his acting skills with his latest public appearance recently.

The 37-year-old filmed a skit for not-for-profit travel organisation, Travalyst.

The advert is part of a campaign for travellers in New Zealand to make sustainable travel choices.

During the advert, Harry is approached by New Zealand comedian Rhys Darby while out on a jog.

The five-minute-long advert has Rhys accusing Harry of littering during a trip to New Zealand in 2018.

“No I don’t think so… we had an amazing time in New Zealand, it’s beautiful,” Harry replies.

The advert has, as expected, picked up a lot of attention since it aired.

Not everyone was a fan of Prince Harry’s new advert – GMB host Richard included!

During today’s show, Richard and his co-host, Susanna Reid, showed a clip from the advert.

“This Prince Harry video. Shall we see a bit more? This is not going to get him a Bafta,” Richard said.

After the clip was shown, Richard made his feelings about it very clear.

“I think this headline sums it up: ‘The Oscar for more toe-curling acting goes to Prince Hammy.’,” he said.

“It is dreadful, isn’t it? How did they even let that out?!”

However, Susanna was quick to jump to the Duke of Sussex’s defence.

She pointed out that he was both spreading an important message, and conveying it clearly.

“He’s promoting something which is green and eco-conscious and really important, which is how it’s not just promoting travel companies and what they’re doing to save the environment,” she said.

“It’s all about rating travellers and as you heard from that, it got the point across! I understand exactly what he’s saying. The number of towels you use, whether you leave the tap running…,” she continued.

In very unsurprising news, Prince Harry’s advert has picked up criticism from some royal fans. Many have slammed Harry’s acting skills.

“Stick to the day job, Harry,” one tweeted.

“It’s just such a mess, it’s really sad what’s become of him,” another said.

What do you think of Prince Harry’s acting? Tell us on our Facebook page @EntertainmentDailyFix.