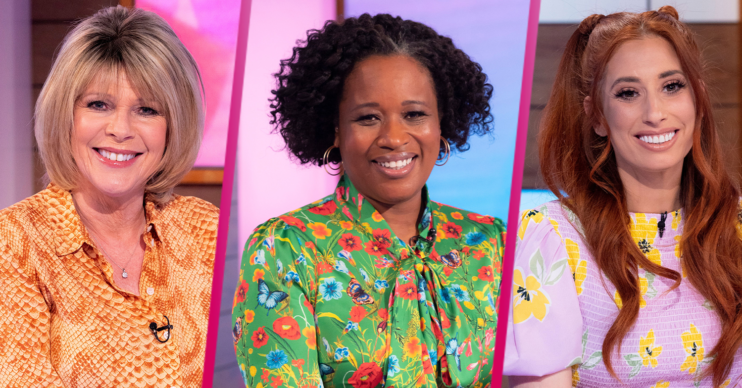 Loose Women presenters past and present: From Ruth, Janet and Coleen to Andrea, Carol and Jane

Many famous faces have graced the panel!

The Loose Women presenters have been entertaining the nation for 21 years – and viewers have seen multiple faces take to the panel to discuss the topics of the day over the years.

The show to beat in ITV’s lunchtime slot, it’s much loved mostly because of its lovely ladies.

Here’s our guide to all the Loose Women presenters, both present and past, who have hosted the lunchtime chat show.

Ruth Langsford made her debut on Loose Women back in 1999 as a guest panellist before officially becoming a regular presenter on the show one year later.

The star, who appeared in the second episode of the show, has become a firm favourite among fans and has starred in hundreds of episodes.

As well as hosting Loose Women, Ruth has also made a name for herself on ITV’s This Morning.

However, she and Eamonn were sadly axed from their Friday slot before Christmas, with Alison Hammond and Dermot O’Leary taking their place.

Kaye Adams is one of the longest-serving panellists on Loose Women since appearing in the show’s first ever episode in 1999. She appeared alongside Nadia Sawalha, Jane Moore and Karren Brady.

After a brief break from the show, Kaye returned in 2013 and was a main presenter in rotation with Carol Vorderman and Andrea McLean.

The lovely Nadia was one of the show’s original presenters when it launched back in 1999.

However, her stay on the show was relatively short lived, as she departed just three years later in 2002.

But Nadia clearly decided that the ITV daytime show is where her heart truly lies.

Read more: Charlene White reveals she was trolled for not wearing a poppy on air

She returned in October 2013 and has had her feet firmly under the table as a regular panellist ever since.

Away from Loose Women, Nadia has appeared on Dancing on Ice, Celebrity Big Brother, The Circle, and she’s written a number of books.

The show’s newest anchor, the lovely Charlene is going down a storm with viewers.

She first appeared as a guest presenter in August 2020 and clearly impressed the bosses.

Come January 2021, she was announced as a new regular anchor.

Away from the show, Charlene is a respected newsreader, hosting ITV’s evening, lunchtime and London bulletins.

She goes down a storm with viewers, mostly because the bubbly star does nothing but laugh!

Away from Loose Women, Judi has appeared on This is my House, Celebrity MasterChef and game show Sorry, I Didn’t Know.

Unsurprisingly, the upbeat star is also a respected comedian.

Kelle has gone from topping the charts in 90s girl band Eternal to airing her views on Loose Women.

She joined as a panellist back in 2019 and, like Denise, also appears in Hollyoaks.

Brenda shot to fame on The X Factor, where she came fourth, back in 2005.

However, what she’s perhaps most loved for is her happy, smiley persona on Loose Women.

She joined as a guest panellist in early 2019, and was brought in as a regular panellist to cover for Linda Robson when she suffered ill health.

In 2020, Brenda was made a regular – much to the delight of viewers.

The gorgeous Gloria Hunniford joined the show back in September 2014.

During the pandemic, Gloria isolate at home.

As a result, she joined the Loose ladies via video link.

They also recently threw her a belated 80th birthday bash.

The lovely Linda has officially been a panellist on the show since 2012.

However, she made numerous appearances before a position became vacant when Jenny Eclair left.

The summer of 2012 saw the Birds of a Feather actress become a Loose Women regular.

Coleen Nolan is a hugely popular panellist on Loose Women thanks to her dry sense of humour and witty remarks.

The presenter became a regular panellist on the programme a year after its launch in 1999. She remained with the show on and off for 11 years.

Coleen left the daytime show in 2011, however returned as a panellist two years later. Since July 2015, the star has also been an occasional main anchor of the show.

Irish presenter Christine Lampard (nee Bleakley) made her debut as a Loose Women panellist back in 2016.

She was a guest panellist at first before becoming a permanent anchor, hosting the show in rotation with Ruth Langsford and Andrea McLean.

Christine, who recently had her second child with retired footballer husband Frank, is currently on maternity leave.

She has also presented for ITV’s This Morning and filled in for Lorraine Kelly on her breakfast show Lorraine.

Journalist Janet Street-Porter is probably one of the most straight-talking Loose Women panellists and definitely lets everyone know how she feels on different topics.

Janet made her debut on the show in 2011 and has been a regular panellist ever since.

The journalist is known for standing her ground on the show and causing a stir with some of her views.

Jane Moore has been a panellist on Loose Women since its launch 19 years ago. The Sun columnist was a presenter on the chat show between 1999 and 2002.

She returned to the programme in October 2013 and has been a regular panellist since.

Jane has also guest presented ITV’s This Morning and has previously been a panellist on Channel 5’s The Wright Stuff.

Stacey Solomon has been a panellist on Loose Women for five years and she’s become one of the more popular presenters on the show.

The former X Factor finalist appeared several times as a guest panellist on the show in 2016.

It was later announced that she would become a regular alongside Lisa Riley after Vicky Pattison and Jamelia left the show.

Viewers love her – and her insights into life at home with fiancé Joe Swash and her three adorable songs.

Denise Welch left Loose Women back in 2013 after appearing on the show for eight years.

The actress starred in over 500 episodes of the show and was known for her straight-talking personality – and her departure came as a shock to many fans.

Denise revealed she left because she was “ready to stop talking about myself”.

However, in 2018 it appears she changed her mind because she was thankfully back in her rightful place – back behind the Loose Women desk!

She said people had forgotten that she was first an actress.

However, that’s not the case now after she recently won a role in Channel 4 soap Hollyoaks.

Former Saturdays singer is one of the most recent additions to the panel.

She impressed bosses in December 2020 when she appeared as a guest panellist.

And, as a result of her success, just two months later, she was announced as a regular presenter.

Andrea McLean was a fully-fledged Loose lady and featured in over 1,00 episodes!

The telly fave made her debut on the chat show in 2007 and left her role on GMTV in 2008 to focus on Loose Women.

However, at the end of last year she announced she was leaving, and viewers were suitably shocked.

She said at the time that it was “a difficult decision to leave” the show after 13 years.

Carol McGiffin was a popular panellist on Loose Women for a decade. She made her debut in 2003 and departed in 2013.

During her time on the show, Carol shared a lot with viewers and even announced her engagement to her toyboy lover Mark Cassidy on the programme back in 2009!

However, a few years after her departure Carol hit out at the show after she failed to secure an invite to Loose Women’s 18th birthday bash in 2017.

She shared a series of tweets, writing: “Not furious, not surprised, just a teeny bit sad.”

The presenter sarcastically replied to one fan saying: “I only did 13 years and over 1,000 shows, why would I even be asked???!!!”

Despite this, Carol has previously said she would go back on the show as a regular panellist.

In February 2017, when asked if she would return, Carol tweeted a fan: “Yes, I would go back but only if certain panellists were let go.”

Sherrie Hewson was one of the longest-serving panellists on Loose Women.

Shortly after her departure on the show, Sherrie admitted she left because she wanted to get back into acting.

She told The Mirror at the time: “I had a chance to go to Hollywood early in my career but I turned it down and I always wondered whether I’d done the right thing.

“I have a friend who’s a casting director in LA and he sent me an email saying I’d be perfect for work over there now.”

Jane McDonald first joined Loose Women as a regular presenter in 2004 and appeared on the show three times a week.

She left in 2010 to concentrate on her music career, however she returned in 2012.

Jane finally made the decision to quit the show for good in 2013.

Head to our Facebook page @EntertainmentDailyFix and tell us which of the Loose Women presenters is your favourite.