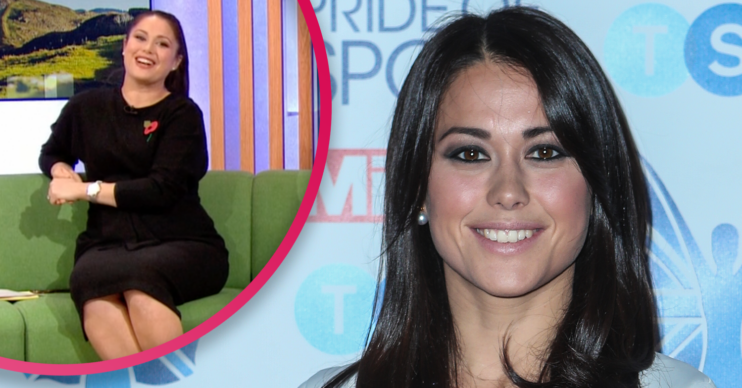 She admitted she 'can't stop eating'

Pregnant Sam Quek was trolled last night (November 9) as she hosted The One Show.

Sam was standing in for Alex Jones and fronted the show alongside Jermaine Jenas.

However, after they went off air, Sam took to Twitter to hit back at one viewer’s comments about her appearance.

What did the troll say to pregnant Sam Quek?

Taking to Twitter, the keyboard warrior questioned Sam’s appearance, in particular her weight.

Tweeting using the #TheOneShow hashtag, they said: “Is Sam preggers or carrying a bit of timber?”

The hashtag is given throughout the BBC One show, with the presenters reading out questions live on air to their guests.

Of course, it isn’t meant to be used for trolling…

As a result, Sam replied: “Me: ‘And if you have any questions to do with anything featured on tonight’s show, you can get in touch with us by tweeting #TheOneShow.'”

She then added a mock response from the troll that perhaps insinuated she wasn’t too bothered by the comment.

Me : “…And if you have any questions to do with anything featured on tonight’s show, you can get in touch with us by tweeting #TheOneShow”

How did The One Show viewers react?

Sam must’ve been overwhelmed with the outpouring of support from her followers.

One said: “Imagine thinking this is acceptable to speak to a woman like that?! Pregnant or not, why refer to someone’s weight. People are weird.”

Another added: “Wow – how rude is that. You look absolutely stunning, I wish I had that pregnancy glow when I was pregnant!!”

Sam also responded with a meme that declared she “can’t stop eating”.

When is Sam Quek’s baby due?

Sam is currently pregnant with her second child – just months after she and husband Tom Mairs welcomed their first.

Sam and Tom are parents to baby Molly, who was born in March 2021.

The new baby is due just two weeks after Molly turns one.

Read more: How did Sam Quek become famous and has she ever won an Olympic medal?

Sam recently told The Mirror: “It was a surprise, but we didn’t stop it happening, if that makes sense.

Pregnancy Sam Quek The One Show