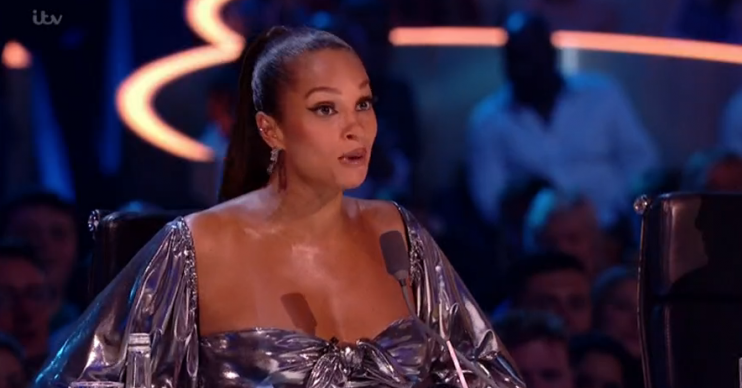 Pregnant Alesha Dixon feared for her baby from “stress” of watching death-defying BGT: The Champions act

Fans worried Alex Magala's routine would send her into labour

The star said the Moldovan’s death-defying act on tonight’s show made her feel so anxious that it was “not good for the baby!”.

Alex had the audience screaming in terror as he plummeted headfirst down a huge pole at Wembley Arena with a sword down his throat, ending just millimetres off the ground.

After his terrifying performance, Alesha told he BGT series 10 finalist and former winner of Russia’s Got Talent: “I genuinely feel I need to have a lie down after that.

“That was so stressful and thrilling.

“I don’t know much more of it I can take. It’s not good for the baby!

“I respect you, I admire you. You’re a professional, you perform like a champion. It was wonderful.”

She wasn’t alone either. Fans also feared for the health of Alesha and her unborn baby, with many taking to Twitter to share their concerns.

One posted: “How Alesha hasn’t into labour, or given birth with some of these acts I don’t know! I just can’t event watch….Judges are covering their eyes!”

Another wrote: “This sword swallower is literally trying to send Alesha into labour here.”

A third added: “I hope they had medics on stand by in case Alesha Dixon went into early labour. #BGTChampions

How @Alicia haven’t gone into labour, or given birth with some of these acts #BGTChampions I don’t know ! I just can’t event watch….Judge are covering their eyes!

This sword swallower is literally trying to send Alesha into labour here..: #BGTChampions

‘I don’t know how much more I can take here’ – I hope they had medics on stand by in case Alesha Dixon went into early labour. #BGTChampions

Alesha cant even watch. Neither can I #BGTChampions

Alex’s highly dangerous routine was praised the other judges.

Simon Cowell told him: “Over all the shows, all the countries, all the years, you’re one of the best Got Talent contestants of all time.

“You have my absolute respect as a person, a competitor, the fact you had the guts to come back again. That was sensational.”

Amanda Holden said: “The last time we saw you, I didn’t think you would ever top what you did with a chainsaw.

“Tonight you proved me wrong. You are hot, you are a champion, you are epic.”

* BGT: The Champions final is on ITV next Saturday night.

The Undeclared War on C4: How many episodes and who’s in the cast?