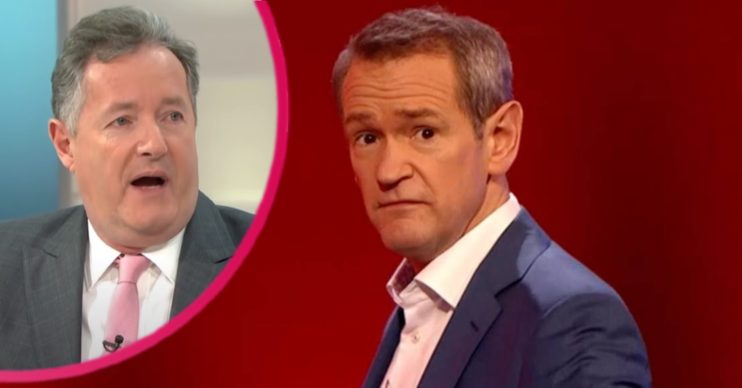 Some viewers called it 'ironic'

Pointless viewers were left stunned as a question on Piers Morgan appeared on the BBC game show on Wednesday (March 10).

During last night’s instalment, contestants were given a clue on the star’s involvement with Good Morning Britain.

However, fans couldn’t help but point out the show’s “awkward” timing after Piers quit this week.

The mention comes days after Piers dramatically stormed out of the studio during Tuesday’s show.

Furthermore, he has been criticised over comments about Meghan Markle’s revelations in her Oprah interview.

What happened on Pointless?

Meanwhile, on Pointless, the clue referring to Piers was read out by presenter Alexander Armstrong.

It read: “Former editor of the Mirror newspaper who became a co-presenter on Good Morning Britain in 2015.”

Before joining GMB, Piers took on the role of editor at the Daily Mirror.

He served as an editor at the publication for over a decade.

Viewers were quick to point out the awkward timing of the question.

Meanwhile, others noted a joke about Piers made by co-presenter Richard Osman.

@richardosman A strangely topical repeat of #Pointless today with Piers Morgan coming up as an answer! pic.twitter.com/fwfW8kl7lD

One wrote on Twitter: “As if #Pointless just had a question asking for a presenter of GMB and the answer was Piers Morgan… Coincidental comic timing at its best.”

Ironic that Piers Morgan was an answer on Pointless tonight

A third added: “#PiersMorgan is an answer on #Pointless. How prophetic…”

Furthermore, a fourth said: “Ironic that @PiersMorgan was an answer on #Pointless tonight and subject of a joke by @RichardOsman.”

Meanwhile, it comes days after Piers suggested he didn’t “believe” the Duchess of Sussex’s claims during her Oprah interview.

At one point, Meghan opened up about struggling to get help with her mental health.

He fumed on Tuesday’s GMB: “Who did you go to? What did they say to you?

“I’m sorry, I don’t believe a word she said, Meghan Markle. I wouldn’t believe it if she read me the weather report.”