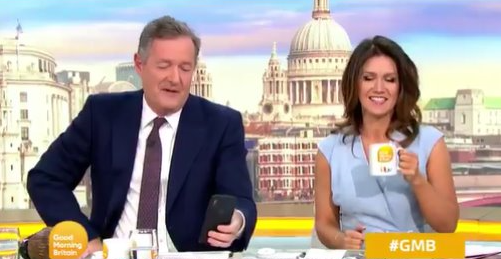 He continues to cause controversy over the royal arrival

Good Morning Britain’s Piers Morgan has revealed that his mum warned him not to say anything controversial about the new royal baby.

Piers explained that his mother Gabrielle sent him a text, worrying about what he might say live on air following the latest royal arrival.

It comes after Piers joked that Prince Harry and Meghan’s little one might be raised as a “gender-fluid vegan” on Twitter.

The 54-year-old presenter read out the message his mum sent him live on GMB today.

The text said: “Piers, I’m really worried about you knocking Harry and Meghan about his baby. Please don’t. It doesn’t seem appropriate.

“I’ll be worrying all night about what you might say.”

Piers then broke into laughter, as his co-host Susanna Reid added: “She’s had a sleepless night.”

The outspoken TV host previously tweeted that he lacked enthusiasm about the royal baby, following the news that Meghan gave birth to a boy yesterday (May 6).

He wrote: “Trying, but currently failing, to muster up a semblance of enthusiasm for this royal baby story before tomorrow’s @GMB.
“Hopefully Meghan will announce her son is identifying as a gender-fluid vegan before we go on air.”

Trying, but currently failing, to muster up a semblance of enthusiasm for this royal baby story before tomorrow’s @GMB.
Hopefully Meghan will announce her son is identifying as a gender-fluid vegan before we go on air.

Piers, who is pals with US president Donald Trump, had another dig when he retweeted a comment that suggested Harry and Meghan call their son Donald!

Following Harry and Meghan’s wedding, Piers accused the Duchess of “distasteful social climbing” in an article for the Mail On Sunday.