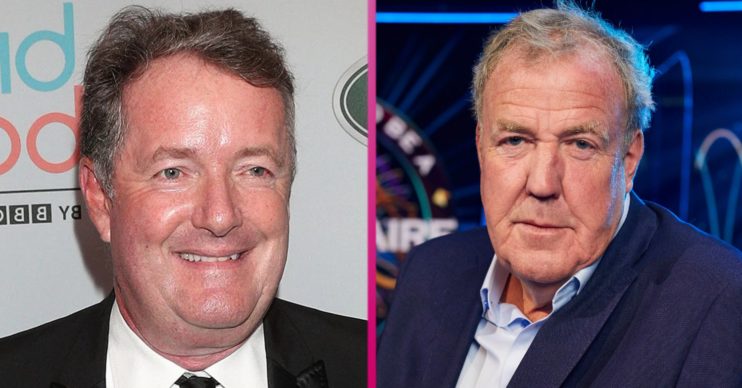 Piers Morgan ‘will star on Who Wants To Be A Millionaire?’ after feud with host Jeremy Clarkson

The pair previously made up in 2014

By Rebecca Calderwood
2 Nov 2020, 12:49
Tags: Jeremy Clarkson, Piers Morgan, Who Wants To Be A Millionaire?

Piers Morgan is reportedly set to star on Who Wants To Be A Millionaire? after ending his long-standing feud with Jeremy Clarkson.

The Good Morning Britain presenter, 55, is believed to be in talks for this year’s Christmas special – years after calling a truce with the game show host.

The pair previously fell out at The British Press Awards in 2004 when Jeremy, 60, punched Piers.

Read more: Piers Morgan shocks fans by sharing workout snaps after being mocked for his weight

The former Top Gear star also previously claimed that he threw wine over his rival on Concorde’s final flight.

However, the two have since patched things up following a five-hour drinking session in a pub in 2014.

Is Piers Morgan taking part in Who Wants To Be A Millionaire?

According to The Sun, Piers has been invited onto the hit ITV show – and has even asked GMB co-host Susanna Reid to be a Phone A Friend.

A source revealed: “Morgan and Clarkson squaring off on prime-time will be telly platinum.

“Piers relying on Jeremy for an answer with Ask The Host will be hilarious viewing.

“Piers has asked Susanna, a history buff, and Joan Collins, who has a wealth of general knowledge, to be Phone A Friends.”

It’s believed ITV bosses are also hoping for Donald Trump to be another of Piers’ picks.

What happened between Piers and Jeremy?

The showbiz rivals ended their long-running feud back in 2014.

In his column for the Mail On Sunday’s Event magazine, the GMB host admitted the pair have been enjoying a form of “simmering peace” ever since.

He wrote: “Ever since Jeremy Clarkson texted me at 1am in 2014 to end our bitter ten-year feud, we have enjoyed the kind of simmering peace that Donald Trump currently enjoys with Kim Jong Un: all beaming grins and over-warm handshakes whenever we meet

“But just one false move away from all-out nuclear war.”