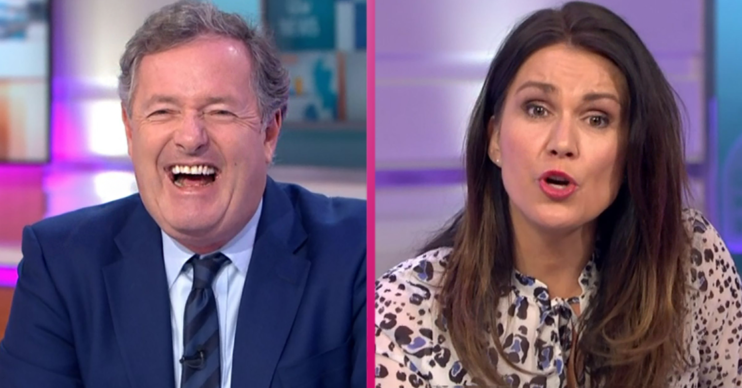 Piers Morgan urges Susanna Reid to go topless: “We could become the most famous show in the world!”

GMB host Piers Morgan told Susanna Reid that if she lifted her top live on air she would make millions of pounds.

Piers couldn’t quite believe it when he read that Kim is set to make an extra $200 million (£162 million) from a new beauty line.

Seemingly exasperated, he said that all celebrities need to do is go nude to make huge amounts of money.

“Kim Kardashian has sold a chunk of her beauty company for £200 million, making her almost a billionaire.

“I think we are all thrilled with that aren’t we, at this time when everyone is losing their jobs. Great to see the talentless Kardashians are even richer.

“Just goes to show you just need to strip off and flip the bird, and you too can be a billionaire.

“Honestly Susanna if you go topless right now and flip the bird to the world you will make this show a hit and get rich.

“The combination of you topless, we could become the most famous show in the world.”

Susanna took Piers’ suggestions in her stride, and confidently laughed them off.

Back in March he accused the reality star turned business mogul of failing to spread awareness of coronavirus.

He argued that instead she continued to publicly air her ongoing feud with singer Taylor Swift.

Piers told The Sun on Sunday: “I hope this situation has given us all some perspective and, that once it’s over, we will stop worshipping material stuff and realise it really does not matter what Kim Kardashian has to say. None of it matters.

“No one gives a rat’s ar*e about Kim’s latest barbs with Taylor Swift.

“These people should be using their platforms to raise awareness about health workers and the importance of staying at home, not for their own gain.”