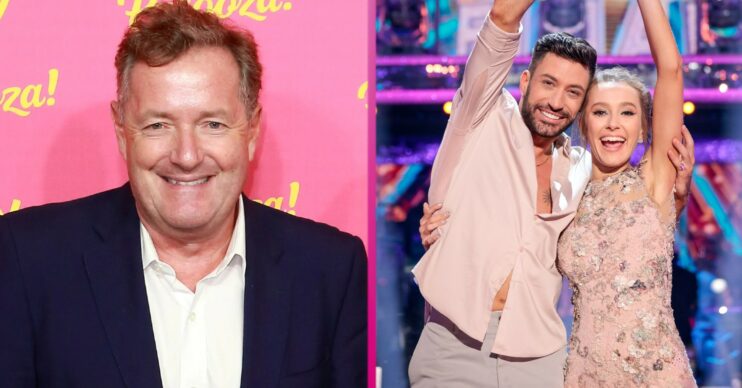 However, some users were far from happy with his verdict on the final episode.

Tuned into #Strictly for the first time in years and everyone’s crying because everyone’s so perfect.
Sorry, but 🤮

The EastEnders actress made history as the show’s first deaf winner.

Following the emotional final on BBC One, Piers was quick to share his thoughts.

Read more: Strictly: Dan Walker hits back as Piers Morgan takes swipe at him after exit

The controversial host penned: “Tuned into #Strictly for the first time in years and everyone’s crying because everyone’s so perfect.

Taking to the comments, one wrote: “Perhaps if you had paid a bit more attention you will see how the programme has educated people on disability and sexuality isn’t it nice in these troubled times to actually have something that is so beautiful!”

Another added: “I’ll take watching soppy Strictly perfection tonight Piers. We are currently living in a world of hate, anger & to be frank it’s [bleep]. It’s taken peoples minds off this pandemic for a couple of hours.”

A third complained: “That’s because you don’t have a heart. Please don’t [bleep] off what has been a brilliant programme to watch for the majority of us. No need for such a comment.”

A fifth added: “The entire series has been a shining example of joy, togetherness and humanity. Everything that you don’t represent.”

One tweeted: “I love Strictly but was thinking the same… too much gushing over each other tonight!”

Another shared: “Couldn’t agree more, every bloody thing on TV now they’re either grizzling or screeching & whoop whooping. The noise level is off the scale.”

Meanwhile, it comes after the star hosted his final episode of Piers Morgan’s Life Stories.

Read more: Piers Morgan savages man who stopped his car to hurl abuse at him in street

He is set to be replaced by Kate Garraway on the programme.

Following his final show, Piers said: “The End. But as Sinatra said: ‘The best is yet to come, and won’t that be fine?’

“See you in 2022 with my new global daily show. Ps I only have one regret about Life Stories – that I never got to interview my dream guest… myself.”