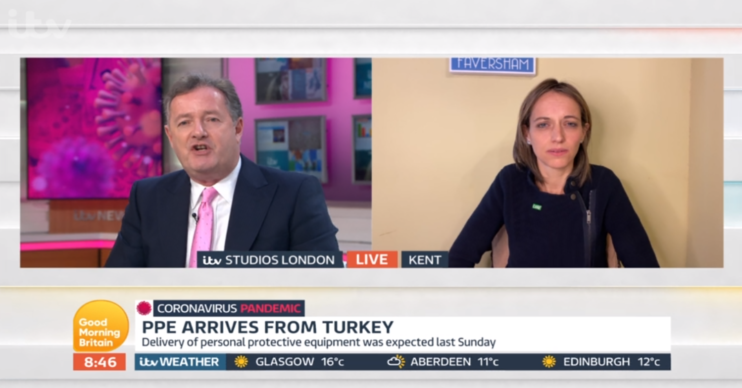 Many branded it a "car crash interview"

Last week, more than 600 people complained to Ofcom after Piers confronted the Care Minister on the show and accused her of laughing during the interview.

Many accused him of “bullying” her, which he denied and stood by his line of questioning.

On Wednesday (April 22), Whately appeared on the show again to discuss the government’s latest developments in fighting coronavirus.

Piers raged over the decrease of the number of coronavirus tests being handed out.

Health Secretary Matt Hancock previously said the target was 100,000 per day by the end of April.

However, there had only been 18,000 new tests carried out yesterday (April 21), which was a fall on previous days.

He said: “I want to know if the Health Secretary is going to meet his own target.

“It’s now April 22nd and we’re testing less people yesterday than we tested 12 days ago which I would argue, is a spectacular failure.”

However, Piers cut in: “I down wanna hear about you ramping up though, with respect you’re not ramping it up.

“When you keep saying you’re ramping things up, you’re not, you’re going backwards. You’re not doing them!”

“You keep talking about capacity, I’m asking you how many you’ve done.

“You should have been doing this all weeks ago with respect.”

Piers went on to discuss Ms Whately’s interview last week in which she “didn’t know” how many people had died in care homes.

He said: “You said this last week, you come back on this programme after what people thought was a train wreck interview.

“You still don’t know and say you’ll come back next week. At what point will you come back and have an answer?

Viewers were divided over the interview and shared their thoughts on Twitter.

One person said: “@piersmorgan quoting inaccurate figures to the care minister and not letting her get a word in edgeways #gmb sunk to a new low.”

Another wrote: “Felt pretty sorry for Helen Whately then. She looked like she was going to cry.”

A third added: “Piers Morgan has just eaten Helen Whately for breakfast. That was hide behind the sofa stuff. Jesus.”

Felt pretty sorry for Helen Whately then. She looked like she was going to cry. #GMB

Piers Morgan has just eaten Helen Whately for breakfast. That was hide behind the sofa stuff. Jesus. #gmb

Others agreed with Piers.

Don’t let people use the Piers “bully” line to deflect you. Helen Whatley has had a week to prepare & get figures and has no clue. #GMB

Piers Morgan once again ripping apart Helen Whately.. How embarrassing that these people are actually our government she has no bloody clue.. 🤔🤔🤔 #gmb