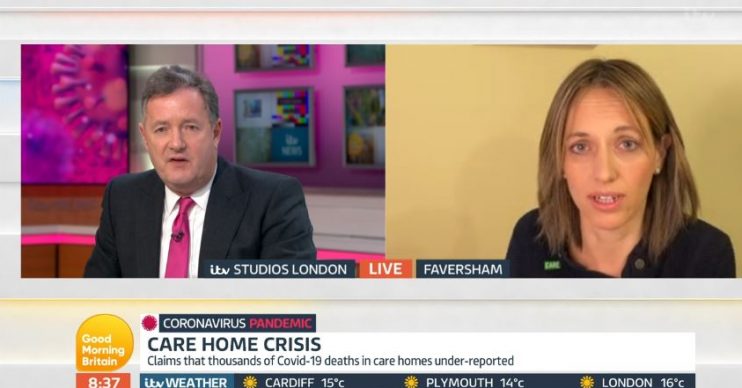 The presenter was furious at her manner

GMB’s host took the MP to task over PPE shortages and the number of patients dying in care homes.

The controversial presenter also asked if she had voted against a pay rise for nurses.

As the exchange got gradually more heated, Piers asked the politician, why she kept “laughing” during the interview.

When asked about the number of deaths in care homes, the Care Minister could not provide Piers Morgan with a straight answer.

She revealed although care workers are a priority, only those with COVID-19 symptoms would be tested for the virus.

However, now their family can access tests to allow them to return to work.

Susanna Reid asked: “Why has this taken so long?”

The Good Morning Britain host demanded to know why MP Michael Gove was tested for coronavirus.

This frustrated Piers Morgan and he hit out the GMB guest.

“Why did Michael Gove get one for his daughter…. so he can go back to his normal life?”

Helen Whately replied: “I can’t comment on conversations that may or may not have happened.”

The journalist shot back: “You say [health workers] are the priority for getting tests but they are clearly not or they would be getting the tests you’re giving yourselves.”

Piers continued: “The priority is not being given to care workers and health care workers who desperately need it.”

‘We don’t have a figure for that’ – Helen Whately @piersmorgan questions the Care Minister over the number of healthcare workers that have died on the front line from the coronavirus. pic.twitter.com/VFcqFJX5SE

Piers Morgan felt the Care Minister was not taking the interview seriously and said:”Why do you keep laughing, what do you find funny?”

Whately quipped: “It seems like you are attempting to score points!”

Piers replied: “I’m not trying to score points, you’re saying care workers are the priority for tests and I’m telling that actually it’s been politicians. Why?”

The MP contiued: “We’re in an incredibly serious situation as a country, when we are attacking a global pandemic which has brought health systems to their knees. ”

Piers interrupted: “Yeah we know all that.”

The Care Minister appeared frustrated as she said: “That’s why having some sort of ping pong back and forth doesn’t help.”

Later on the Care Minister said it was “really important to show our appreciation for health workers.”

However, Piers fired back, revealing she had voted against a pay rise for nurses.

“You voted in favour of the cap being lifted did you? The nursing staff you value so highly didn’t warrant the pay rise.”

The MP dodged this question and responded: “The particular vote you are talking was political posturing I’m afraid.”

Good Morning Britain played a clip of politicians cheering when this law did not pass.

Piers commented it was not the time to just praise the National Health Service but actually increase their pay.

Helen Whateley ended by saying: “What matters is we have been increasing the pay of nurses… We are working hard to ensure health care workers have the PPE they need. I’m well aware of  worry and concerns people have.”

Viewers at home called the segment a “car crash” on “both sides”.

The Care Minister was seen repeatedly dodging questions, while Piers continued to interrupt her answers.

While some praised Piers Morgan, many slammed his interview style, calling the journalist a “bully”.

One tweet read: “That was car crash TV #GMB”

Another agreed: “@piersmorgan Your interview technique is nothing more than bullying. It’s pathetic. #gmb @GMB@Helen_Whately”

One tweeted: “I am sick and tired of listening to Piers Morgan shouting and talking over people just to try and make himself look good. The TV is under threat from a brick #GMB #weareallinthistogther”

A final user shared: “Shut up and listen to the answer  @piersmorgan your interviewing technique is terrible, you should be ashamed of yourself! Constantly talking over the answers and not taking in the details. Your #gmb viewers deserve better! ”

However, the marmite TV front man impressed legions of fans with his direct line of questioning.

One user said: “@piersmorgan savages the care minister on  @GMB when you face the Morganator you best have your facts right #GMB.”

Another user added: “Love how  @piersmorgan is standing up for us carers that go unnoticed get  [bleep] pay and are called unskilled! Thank you piers 👏🏼 #GMB #PiersMorgan”

I think it's safe to say we won't be seeing Helen Whately on morning television again. I don't often agree with @piersmorgan, but he did a brilliant job in his questioning of the health minister #GMB #GoodMorningBritain