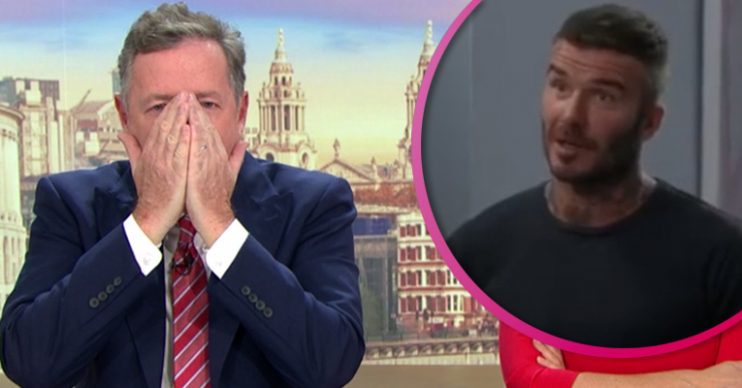 He claimed Becks was 'overlooked' for a Golden Globe

Former newspaper editor Piers, 54, rarely goes easy on the Beckham family, having slammed them for years – including for chewing gum at the wedding of Prince Harry and Meghan Markle, for posing on the front cover of glossy mags and more than once over David kissing daughter Harper on the lips.

And so, for his return to the ITV breakfast show after his Christmas break, it is not all that surprising that Piers tore into Becks once again following his cameo in US TV hit comedy Modern Family alongside Courteney Cox.

Reflecting on last night’s Golden Globes bash, Piers cheekily pretended to be surprised that Dave was ‘overlooked’ for a gong.

“There was another acting role over the festive period that caught my eye, which I was amazed didn’t get mentioned at the Golden Globes last night,” he sneered.

Piers continued to poke fun after a clip of the ex Manchester United star’s telly moment was shown, which also featured Stephen Merchant.

He really nails this, look at how un-wooden this is.

“Obviously Hollywood watched that and thought: ‘We need more Beckham in our movies,'” Piers chuckled as his fellow GMB presenter Susanna Reid bit her tongue.

Continuing the sarcastic tone, Piers explained: “They got him in the smash hit TV show Modern Family and David made a glorious attempt… he really nails this, look at how un-wooden this is.”

Read more: EastEnders viewers fuming as soap is cancelled tonight for the football

“Did he not get a mention at that Golden Globes?” an amused Susanna asked, not-very-innocently.

However, GMB newsreader Charlotte Hawkins attempted to stick up for Becks, insisted: “That’s very rude of you.”

But her protest fell on deaf ears as an image of three short planks flashed up on screen.

Piers continued: “There are three planks of wood that are exuding more thespian qualities than anything Mr Beckham can give us.”

And then he turned on Charlotte for defending Becks, bantering away about her 1980s-style blue dress.

“By the way, Crystal Carrington from Dynasty…” he joked.

The episode of Modern Family featuring Becks’ cameo is due to air in the US on January 8. A date for UK fans to watch is yet to be confirmed.