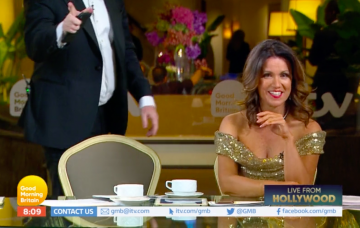 Viewers were divided by the show's backstage coverage

We all know Piers Morgan has a short fuse – particularly when he’s not getting enough attention.

That was proved beyond all doubt on Monday morning when the Good Morning Britain presenter stormed off set to confront Leonardo DiCaprio after the A-list actor denied he knew him.

Piers, 53, and his co-host Susanna Reid were presenting live from Hollywood for a special Oscars-themed GMB on Monday morning.

The awkward incident occurred when Vinnie, 54, tried to speak to Leonardo, 44, backstage. He told Piers: “I’ve been in the lounge with DiCaprio trying to get him on and he said, ‘Piers who?'”

Looking livid, Piers replied: “He said ‘Piers who?’. Are you serious? You’ve made that up.”

Vinnie told him: “He’s just given you the custard pie, son,” as Susanna muttered: “Hashtag awks.”

After an ad break, Susanna, 48, explained: “Commiserations to you, Piers, because we just had a slightly awkward moment earlier… And Vinnie has just suggested he go into the Polo Lounge with him and remind DiCaprio who he is.”

The disgraced journalist complained: “I don’t believe this. Vinnie Jones is trying to smear me. I’m going to go have it out with DiCaprio. Because the last time I saw him he said, ‘Hi, Piers!’ so someone’s not telling the truth here.

“I’ll be back when I’ve had a chat with Leo.” He then got up and left the set to confront the Titanic star.

Later in the show, Piers claimed Vinnie’s story wasn’t true, saying: “I went to confront Leo DiCaprio after Vinnie Jones suggested he said ‘Piers who?’ As I was about to confront him about this, Vinnie admitted he’d made it up.

“He had talked to DiCaprio, but DiCaprio had not said ‘Piers who’. It was a typical Vinnie Jones prank.” Piers also wrote on Twitter: “Fake News… Vinnie admitted he made it up to annoy me.”

Viewers were divided by the episode, which saw Susanna and Piers reunited after three weeks off.

Some enjoyed it, commenting: “Congratulations both of you 👏👏😘😘.” A second added: “Great show!” Another wrote: “Really funny to watch!” While one more complimented the guests, saying: “Loved seeing Vinnie there @VinnieJones65 so down to earth :-).”

But not everyone enjoyed the new format. One wrote: “I thought it was all a bit flat. Scraping the barrel with Mel B & Vinnie Jones. Not one of your best.” Another said: “What a [bleeping] mess Good Morning Britain is this morning.”

A third tweeted: “This is awful, please don’t ever repeat this bore-fest amateurish rubbish again.#GMB” While even Susanna admitted it was “chaos.”

Others moaned about the one-note coverage, writing: “Turned over to BBC for real news…not all of us are interested in the #oscars.” A second commented: “[Bleeping] rubbish this morning. Not at all interested in the Oscars!!!”

Another tweeted: “You lost me today, so that’s one less, and if you are on tomorrow please no Oscar talk as it bores me to hell…” A fourth added: “Awful show, had to turn over, who cares about the Oscars at breakfast time or any time!!”

We love a bit of glitz and glamour. And we also love a dramatic storm out…

What did you think of GMB’s Oscars coverage? Leave us a comment on our Facebook page @EntertainmentDailyFix and let us know what you think.