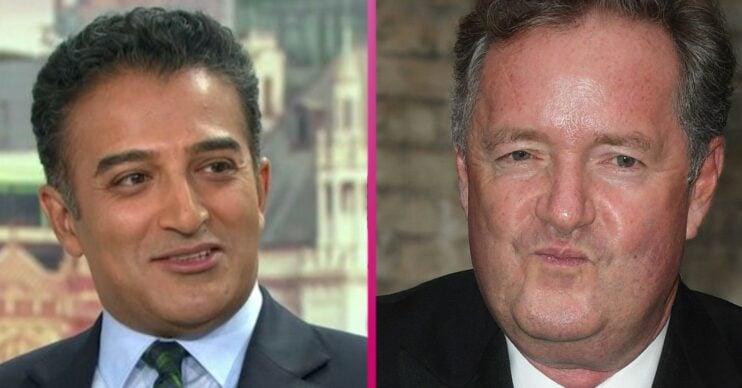 Piers Morgan has snapped back at Adil Ray after the presenter took a playful swipe at him on Good Morning Britain today (Wednesday 24 November).

Piers took to Twitter this morning to fire back at GMB host Adil with a swipe of his own.

What did Adil say about Piers Morgan on GMB?

On today’s edition of Good Morning Britain, Adil Ray and co-host Susanna Reid welcomed journalist Kevin Maguire onto the show. They were about to host a debate about parents taking their kids to work with them.

This debate comes after MP Stella Creasy revealed that she had received an email telling her she wasn’t allowed to bring her baby into the Commons.

Kevin said: “I can see why there are some restrictions. Look, most parents can’t take their babies to work. You’re driving a cab or you work in a call centre, you can’t take your baby.

“When yours were younger, Susanna, have you ever been doing presenting with a baby, rocking him/her at the time?”

It was at this point that Susanna’s co-host, Adil Ray, took a swipe at ex-Good Morning Britain presenter, Piers Morgan.

“You’ve presented with some babies over the years, haven’t you?” Adil asked, drawing laughter from the other presenters.

“They stormed out and had a bit of a tantrum,” he added, leaving everyone in no doubt as to who he was referring to.

In case you didn’t know, Piers stormed off set back in March after having a heated debate with Alex Beresford over Meghan Markle.

How did Piers Morgan respond?

Hmmm. Given how Mr Ray has helped destroy GMB’s ratings since I left, if I were him I’d probably avoid mocking the guy who took them to record heights…. https://t.co/iTmZ7g1fR5

Piers took to Twitter this morning to snap back at Adil and his comments.

Quoting an article on Adil’s dig at him, Piers tweeted saying: “Hmmm. Given how Mr Ray has helped destroy GMB’s ratings since I left, If I were him I’d probably avoid mocking the guy who took them to record heights.”

The reaction to Piers’ tweet by Good Morning Britain fans was mixed, to say the least.

What did Good Morning Britain fans have to say?

“We all wish you were back on GMB Piers, it’s gone downhill since you left. No one can replace the magic you and [Susanna] had. Such a shame!” one viewer tweeted.

“Nah, he’s mugged you off and got your job,” a third fan tweeted at Piers Morgan.

“You have to question GMB,” another viewer said. “Ray & [Richard] Madeley are awful, I just switch off now.”

Meanwhile, Piers Morgan was a host on Good Morning Britain between 2015 and 2021. He left in March 2021 after the show received a record 57,000 Ofcom complaints. These complaints came after Piers’ scathing criticism of the Oprah interview with Meghan Markle and Prince Harry.

However, Piers was cleared of any wrongdoing by the TV watchdog in September 2021.

What did you make of Piers’ response to Adil’s swipe on Good Morning Britain? Leave us a comment on our Facebook page @EntertainmentDailyFix and let us know what you think.