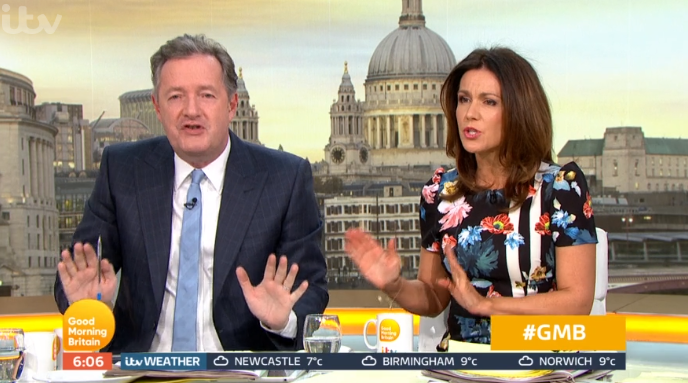 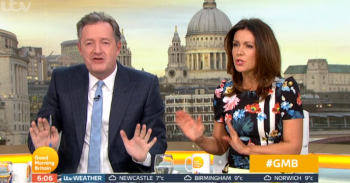 Susanna had fun winding her co-host up

The presenter was having one of his usual rants as he lashed out at Killing Eve producer Phoebe Waller-Bridge for saying it’s ‘oddly empowering to see violent women on TV’.

But Piers got a taste of his own medicine when Susanna, 47, decided to cut in and interrupt him during his rant.

Piers began: “Imagine if a man said this: ‘Seeing men be violent is refreshing and oddly empowering.’

Piers hit back: “Wait, wait – I haven’t finished yet. I didn’t say that… There’s no context.”

But Susanna wouldn’t let him finish his sentence and interrupted him every time he tried to speak saying: “You do.”

Piers snapped: “Can I finish or not?” to which Susanna quipped: “I’m just winding you up.”

Piers wasn’t impressed and rolled his eyes before muttering: “I can’t say anything, can I?”

Susanna hit back: “Welcome to my world!”

You know it’s a Monday morning when you see this look from @susannareid100… pic.twitter.com/Ch58A2ek0X

Piers said: “I’m trying to explain and you won’t let me. Do something other than interrupting every two seconds.

“It’s pretty ironic from someone who, in every interview she gives, says ‘I wish he’d stop interrupting me’.”

Last year, Susanna told the Radio Times that she feels in a “constant battle” with Piers on the programme.

The presenter said: “It’s a constant battle for airtime. Sometimes I open my mouth to ask a question and hear Piers’s voice come out – so you can’t help but go into battle with him every morning.

“I know it’s not personal. But there was a time when I took this a lot more seriously, and personally, than I do now.”

Susanna added: “You couldn’t describe Piers as lovable. And I don’t think everybody necessarily wants a double espresso shot into their veins in the morning. Some people want a nice cup of tea. And there is absolutely a role for both.”