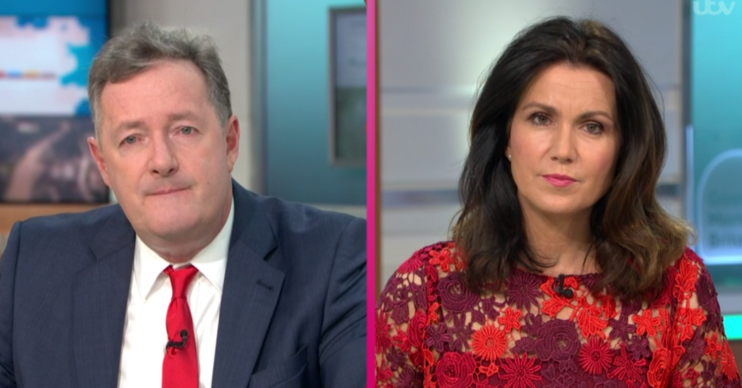 GMB: Piers Morgan snaps at Susanna Reid as she apologises for him

GMB co-hosts Piers Morgan and Susanna Reid have been back on-screen together two days and they’re already needling each other!

Susanna apologised after Piers said FFS as he was reading out a tweet from a viewer moaning about him.

Piers clapped back, saying that he hadn’t sworn.

She argued that it is an acronym (she meant initialism) for a swear-y phrase.

They moved on and got back to business but guest Ian Wright brought it up later and quipped that he’d enjoyed their tongue tussle. And so did we!

This isn’t the first time Piers has snapped at his co-star for apologising for his swearing.

Back in July, Piers was reading out a tweet from one of his critics, which included the insult ‘knobhead’.

The 55-year-old journalist read the whole tweet, including the slur.

Susanna then apologised for the swearing: the “use of the N word”.

Piers was clearly unhappy. Firstly, he’s not a man to allow anyone to make an apology on his behalf.

And secondly because Susanna had made a spelling error.

Disgruntled Piers pointed out that ‘knobhead’ is spelt with a ‘k’, not an ‘n’ – “as in knob of butter”.

In so explaining, he repeated the word again!

Susanna and Piers’ ding dongs have become part of the fabric of the show, adding some spice to the mornings!

In June, the duo discussed care minister Helen Whately and her controversial comments about student nurses.

In a letter to paediatric nursing student Jess Collins, she said that student nurses were “not deemed to be providing a service”.

Following the backlash, the government issued a statement which Susanna wanted to read out on GMB.

“We asked for an interview but no one was available,” she told viewers.

“The Department of Health though say Helen Whately’s words were taken out of context.”

As she proceeded to read out the statement, Piers lost it, raging: “Sorry, why are you going to read this?

“If they can’t be bothered to come on our programme, why should we read their wishy-washy little statement?”

He added: “If they’re boycotting us, I’m going to boycott their stupid little statements. I think you should. You don’t have to read it.”

Susanna reasoned that she was interested in what the government had to say.

“If they’re boycotting us, I’m going to boycott their stupid little statements.

But Piers hit back: “Why bother. You’re just reading a PR release. If they want to defend it then they should come on and defend it.

Long may their bickering continue… we missed it over the summer!